Per Brett Okamoto of ESPN, verbal agreements have been made to have Mackenzie Dern face Amanda Ribas later this year on October 12.

First reported by Brett Okamoto of ESPN, popular Brazilian jiu-jitsu ace Mackenzie Dern will be entering the Octagon for the first time since defeating Amanda Cooper back in May of 2018.  While she had been in talks about fighting again last year, her return was pushed back upon learning she was pregnant.  Dern welcomed her daughter Moa on June 09 with her boyfriend, Brazilian professional surfer Wesley Santos.  The former Worlds and ADCC champion carries a perfect 7-0 record inside the cage.

Her opponent Amanda Ribas is riding high off her successful UFC debut in June where she stopped former Ultimate Fighter contestant Emily Whitmere by second round rear-naked choke.  The victory came after a nearly two year absence from competition as Ribas was serving a suspension following a failed USADA drug test that was found to be caused by tainted supplements.  Ribas has a 7-1 record with her only loss coming to fellow UFC strawweight Polyana Viana.

No location has been officially announced as of yet for the fight on October 12, however San Francisco has been widely reported as the landing spot. The card is set to be headlined by former strawweight champion Joanna Jędrzejczyk taking on surging contender Michelle Waterson. 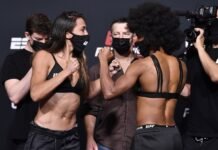