As Krzysztof Jotko has progressed in his MMA career, he’s learned to focus on the mental aspect of the game – including accepting that he needs to find himself as a fighter.

Edmonton, AB — Three years ago, Polish middleweight Krzysztof Jotko traveled to Canada for the first time in his professional career. He wound up scoring a knockout of Tamdan McCrory at UFC Fight Night 89, the fourth victory in what would be a five-fight win streak from 2014 to 2016.

This Saturday at UFC 240, Jotko returns to Canada once again. The reminder of that first fight has him in good spirits; a strong camp at ATT has him well-prepared for opponent Marc-Andre Barriault.

“This camp I train with a lot of people,” he told Cageside Press on Thursday. “I trained a lot with Colby Covington, I trained a lot with Antonio Carlos Junior, I trained with King Mo.” Plenty of others. Even PFL champion Magomed Magomedkerimov. Enough that Jotko was worried about missing a name and snubbing someone. “A lot of people. There, it’s always tough. If you go there and you [aren’t] in shape, you just get beat up.”

Jotko (20-4) has remained with the UFC since 2013. The secret to that success, he said, is that “I’m a really exciting fighter. I have good fights.”

“I’m always ready to fight. I never say no to UFC. They give me opponents. I think I just one time pulled out of [a fight]. I always make weight, and I’m just good,” he added. “That’s the key.”

The fight with Barriault is one that Jotko’s coaches see as a favorable match-up for their fighter. “My coaches say ‘he’s good for you.'” Barriault, of course, has his weapons. “He likes to pressure and go forward, and use dirty boxing. I think [those are] his dangerous weapons.”

As for how Jotko gets it done, “my elbows,” he answered.

Of late, Jotko has been working with a mental coach. “You can say like psychologist or something, but it’s more like a mental coach. He wants to tell you, like you need to understand why you do this, for what you do this, who you are,” the middleweight explained. “Before, I said ‘ah I want to go to the fight, I want to be like Robbie Lawler, like aggressive, knock him out.’ But if your nature is not aggressive, you’ll never be Robbie Lawler. I’m Jotko, I’m not Robbie Lawler. So I started to train to myself, I started to train what I love to do.”

“I like the kicks, I love the knee, elbows. I was a break dancer before, so I have great movement. And I just do what I do the best,” he continued.

Yes, that’s right. Breakdancer. Jotko, who fell in love with MMA after watching Tito Ortiz fight with Ken Shamrock, was a break dancer for years. And while we couldn’t ask him to break out any moves Thursday, he did say we might get to see some after his fight. And when not fighting or having a bout coming up, “I breakdance a little bit. I’m not practicing, because I’m scared about injuries, but I do what I know when I was a kid.” 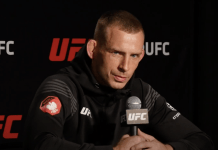 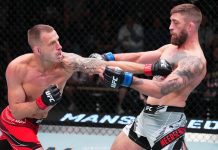