The final women’s lightweight fight of the PFL 2019 season was a big one, as Kayla Harrison could either move into the playoffs, or perhaps be left out of them entirely.

Kayla Harrison was back in action Thursday, as the PFL 2019 Week 4 event went down in Atlantic City, NJ. The Olympic gold medalist, undefeated thus far in her MMA career, was taking on Morgan Frier, a 4-2 fighter whose nickname ‘Mad Dog’ stemmed from the determined nature of her fight game.

Kayla Harrison was looking for a dominant win, after a decision victory earlier this season left her in tears and with three points. The win over Larissa Pacheco was the first time in her career that judges’ scorecards were required.

Morgan Frier came into the PFL season on a four-fight first-round stoppage streak, but that was stopped in the first round of her promotional debut against UFC veteran Sarah Kaufman.

Frier stayed outside early in the final bout of the women’s lightweight regular season. Before long, however, Kayla Harrison closed the distance, and had Frier down. Harrison took control of the back, but was on the inside against the fence. Harrison managed to land some big strikes, however, and get a hook in. Frier rolled to her back, and Harrison found herself in half-guard. From there she would land some more ground n’ pound, while Frier worked to grab an arm. No dice. Harrison backed off, and landed some huge strikes from her feet while Frier was still on her back. Harrison then re-engaged on the ground, and would manage to isolate her opponent’s arm. Before long, Frier was in a nasty spot, forced to tap to the key lock!

With nine points following the win, Harrison moves into the post-season, alongside fellow stand-out Sarah Kaufman. Harrison will face Genah Fabian in her next fight, this October. Fabian was victorious earlier in the night. Following the fight, during her in-cage interview, Harrison said that if all went to plan, her and Sarah Kaufman would meet in the finals, and “I’m going to be a millionaire!” 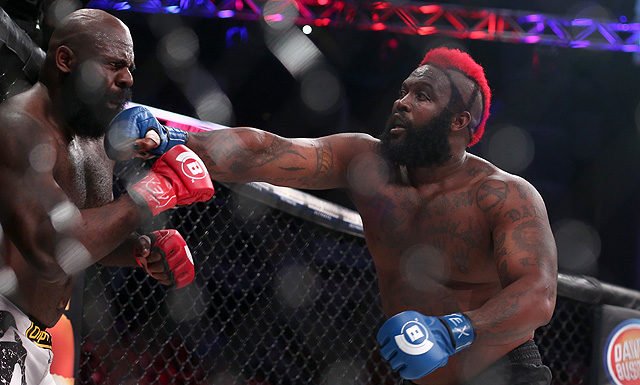