Canada’s Bobbi Jo Dalziel was set to face Larissa Pacheco of Brazil in women’s lightweight action at PFL 2019 Week 4. The show went down in Atlantic City, NJ on Thursday night, and was billed as PFL 4, with the promotion resetting the count for 2019.

Larissa Pacheco had an impressive start to her MMA career, going 10-0 with six submissions and four knockouts. Included in that run was a victory over current UFC bantamweight Irene Aldana. She was then signed by the UFC, where matchmaking was not in her favor. In her two Octagon appearances, she fell to current champion Jessica Andrade and former champion Germaine de Randamie. After a submission win outside the promotion, she was invited onto The Ultimate Fighter 28, where again, she lost to eventual season winner, Macy Chissaon. She’s looking for her first points of the PFL season after losing to Kayla Harrison earlier this year.

Bobbi-Jo Dalziel comes into PFL 4 2019 undefeated through five career fights, including a three-point victory over Genah Fabian earlier this season. Her four wins prior to that include a 30-second head kick knockout and a pair of TKO stoppages.

The Brazilian pressed the action early in this lightweight scrap, moving in, with Dalziel opting to a clinch. Whether she fell back or pulled guard, Dalziel wound up with  Pacheco landing on top. In half guard, Pacheco worked to improve position, which she did, working her way to mount. Dalziel attempted to control her oppponent’s hands until Pacheco finally found some space to drop a bit of ground n’ pound. While the Canadian would survive that, Pacheco would lock on with an arm-bar. The tap soon followed, and the women’s lightweights quickly had two straight first round finishes in on the night.

More importantly for Pacheco, she had clinched a playoff spot — and the Dalziel loss paved the way for Genah Fabian to join the post-season as well. 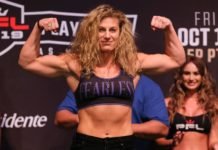