Claiming six points and with her eye on the standings, Genah Fabian knocked down Moriel Charneski early at PFL 4 2019 on Thursday in Atlantic City.

Genah Fabian comes into PFL 4 2019 in desperate need of a win after losing her first fight of the season to Bobbi-Jo Dalziel. The Samoan fighter is a Muay Thai specialist with a 7-2 record in striking martial arts, including a World Muay Thai Council title victory over Invicta fighter Charmaine Tweet.

Moriel Charneski also is coming into PFL 4 with zero points in the 2019 season. She debuted with the promotion during last year’s championship event, where she was swiftly stopped by Kayla Harrison via ground-and-pound. The 29-year-old has had a tough career thus far, going 3-6 as a professional.

An early exchange kicked off the opening fight of the evening, and saw Fabian getting the better of things on the feet. Charneski then shot for a takedown, only for Fabian to sprawl. Forced to remain on her feet, things did not go well for Charneski from there. Genah connected with a left hand that dropped her opponent, Charneski’s head falling back. She stayed in it long enough to eat some ground n’ pound, before the ref moved in to wave it off.

With the win, Fabian earned six points (three for the win, three for the finish), and is in a good spot in terms of the standings. “There’s not one of them that I’m not prepared to stand across from,” Fabian said following the bout, when asked about the rest of the competitors in the division. 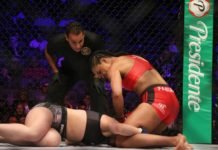 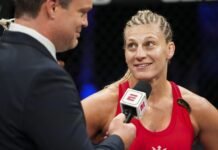