With UFC contract in hand, Brazil’s Antonio Trocoli will have to make a decision on where he fights next, after a big win on the Contender Series.

Las Vegas, NV — Starting his career at welterweight, Antonio Trocoli moved all the way up to 205lbs just to find opponents willing to fight him. Now, with a Contender Series win and UFC contract, he’s unsure which division he’ll call home.

The win came on the third week of the show for this, Dana White’s Contender Series’ third season. Stunningly, all five winners picked up UFC contracts on the night. But Trocoli’s story stands out — because despite the win coming at light heavyweight, he’s a former welterweight.

“I’m really happy right now, I don’t even know if I’m waking up or if I’m still sleeping,” he told media members including Cageside Press following the win, speaking via translator.

He had full confidence in his submission skills. “I was sure that I was able to submit him on the ground. I train with the best, I’ve been training with the best for a long time. If you guys were surprised to see me submit Kenneth Bergh, you have to see some of my training partners.”

However, the fight was not without its setbacks for the Brazilian. Trocoli suffered a broken foot during the fight, something that forced him to adapt.

“Right when I kicked him, I knew I hard broken my foot,” he recalled. “My game plan was to walk forward and pressure him in the cage, but when I broke my foot, I stepped down a little bit. He came and pressed me against the cage but I was really relaxed. I let him use his strength, I was feeling his breathing. When I felt he was getting tired, I took him down, I took his back.”

“I even told him, when the choke was on, ‘I got you, I got you. This is Brazilian Jiu-Jitsu,'” he finished.

As to what comes next, the bigger question might be where. As in weight class. “I always fought in welterweight in Brazil actually,” he said. However, a lack of opponents saw him move all the way up to 205lbs. “I don’t know what’s next.” 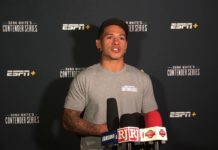 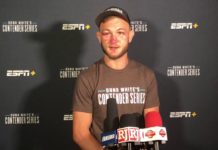 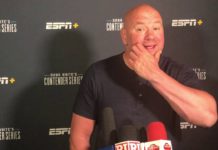