Following a roller coaster ride of six fights and a move to another state, Hunter Azure took home a UFC contract Tuesday on Dana White’s Contender Series, but was critical of his performance.

Las Vegas, NV — Of the five winning fighters at this week’s edition of Dana White’s Contender Series, Hunter Azure was the only one to go the distance. In the end, however, it didn’t matter. Dana White handed out five UFC contracts, an unprecedented move on the show. And just like that, bantamweight Azure, who improved to 7-0 on the night, was in the UFC.

“I don’t know if it’s fully hit me yet, but I feel great, I still feel healthy,” he told media members in attendance, including Cageside Press, following the fight. “It’s just been a roller coaster. This past year I’ve had six fights. Then just moving from Montana down to Phoenix, meeting new people — coaches, training partners. It’s been a wild journey so far.”

Many fighters are their own worst critics, and Azure is no exception. “Honestly I was a little hard on my performance tonight, it wasn’t exactly the way I planned or wanted it to go,” he remarked back stage. “I wish I’d let my hands go a little more, maybe stayed up on those kicks instead of going to the ground, but he’s a tough opponent, he was a little tougher than I expected. I think that helped me earn that contract tonight for sure.”

What hindered Azure was that “I just wasn’t finding my range, I wasn’t setting up that kick with any punches before it. His game, his style, I guess the way he came out was a little different than I expected.” Which forced Azure to change things up. “I just kind of adjusted on the fly.”

He also felt he relied too much on his low kicks. “Once I started landing that low kick, I knew I was hurting him a lot, and I kept going back to that. I should have waited maybe, threw some hands, went back to it, mixed things up a little more instead of focusing on that one position the whole time.”

Then there was a bit of gamesmanship by his opponent, Azure added later. “Every once in a while it kind of felt like he was slipping his thumb in my glove and then he was pulling it back.” Azure looked to the ref. “I told Herb Dean like twice in there ‘he put his hands in my glove.’ I’m not using that as an excuse or anything, it’s just something to watch for, something I need to keep in my mind for future fights.”

Some of his struggles, however, might just be chalked up to big fight nerves. “I think I got caught up in the moment a little bit in there, with a big fight on the line,” Azure admitted. “Played it safe a little bit, I would say. But it’s the first big fight I’ve had like this, so I’m glad I can shake this one off, and go back to the drawing board.”

Ultimately, winning a UFC contract is “an amazing feeling” said Azure. “It’s going to drive me to keep training harder. I don’t want to ever get content with thinking I’m good or anything. I just want to keep growing, keep growing in every aspect of it.”

As to what comes next, “I’m going to fight anyone they throw in front of me, and keep growing, but I’m not going to back down from anyone,” Azure said. “I’m here to fight, I’m in the fight game, I’m ready to fight anyone, if they want me to fight next month or whenever. But I want to get one in by the end of the year for sure.” 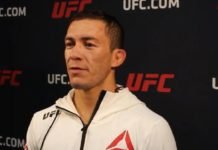 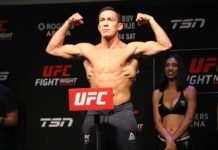 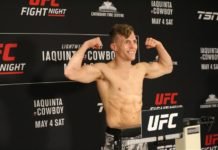 Katona vs. Azure, Pereira vs. Khandozhko Unveiled for UFC Vancouver