Gabriel Varga is a multi-time kickboxing champion with successes on a massive international scale. His reputation is solidified in that realm but Varga wants to expand his range of combat sports efforts, starting with Bellator 224.

Gabriel Varga is getting prepared to make his mixed martial arts debut and will do so at Bellator 224 on Friday, July 12. The Bellator Kickboxing champion joins the promotion’s MMA ranks against Jamese Taylor III at WinStar World Casino in Thackerville, Oklahoma.

Transitioning from Kickboxing to MMA

Gabriel Varga knew he had to do his due diligence to make this combat sports switch go smoothly. For Gabriel Varga, this MMA effort is not a flippant decision but something that has been a long time coming.

“When first I signed with Bellator back in 2017, I had them put in the contract that I would be able to do some MMA… What held me back before was needing to win the Bellator Kickboxing title first. I just didn’t have time to put in the ground work. I needed a new challenge and something different”

Gabriel Varga would have had a lot of downtime as Bellator wanted him to compete again in the fall. Varga wasn’t satisfied with that and saw an opportunity to allocate time to train MMA and take a fight. Revolution MMA in Langley, British Columbia, has been a facility Varga has trained at but he also has been putting in work at a few other gyms.

Varga has the highest level of kickboxing experience having also competed for K1 and Glory. To learn all the nuances of submission grappling has been exhilarating for Varga and he comes enthused as well as ready to learn at every training session.

Gabriel Varga is a cerebral fighter and researching an opponent is key for him. It informs his approach, gives him confidence, and gives him a read on what foes will do on fight night.

Varga’s had a big mental shift in this particular camp as compared to others.

“That’s been the big difference in this camp for me. I’d have 10 weeks and the 10 weeks are about getting in shape and making sure my timing is on point. Whereas for this one, I need to learn so much and it’s scary. I’m not just on cruise control anymore.”

Gabriel Varga sees himself as a martial artist first and foremost. Varga has a karate background that informs his kickboxing and is seasoned in a myriad of disciplines already. To learn a few different combat styles is not altogether unfamiliar to the stand-up savant.

Bellator in Canada is something that the Great White North compatriot would be quite intrigued by. Varga would love a chance to compete on his home soil and show off his skills as a martial artist. Kickboxing not being legal in BC has long hindered Vargas but through Bellator, Gabriel could eventually find himself having a home game.

“I haven’t competed in Canada since 2011, so the opportunity to fight at home would be beautiful.”

The schedule Gabriel Varga wants to keep in the coming months is ambitious to say the least.

“I already have my next kickboxing fight lined up for the fall. I’ll stay active in both and I think with the MMA, I just have to make sure I’m not taking big long breaks in between. That won’t be a good way for me to build on the MMA. At least every six months, I’m having at least one fight in mma. I’ve just got to stay active on the groundwork.”

Varga found that past lulls in training between jiu-jitsu sessions made him forget what he learned. Being inactive for weeks or even months from BJJ lent itself to Varga forgetting key techniques next time he trained. Through that process, Varga has learned he needs to be consistent with working on his ground game so there’s that retention of submission grappling techniques.

Gabriel Varga takes on Jamese Taylor III as part of Bellator 224’s preliminary portion. The prelims go at 6:45 PM ET and the main card are at 9:00 PM ET live on Paramount Network. Tune in Friday, July 12, for a compelling MMA debutant in Gabriel Varga. 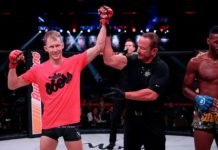 Bellator 239: Gabriel Varga Admits He is a Lot More Nervous in MMA Compared to Kickboxing