Downey, who has yet to compete in mixed martial arts, will make his MMA debut sometime in 2022. The move continues a trend of Bellator signing unproven but promising prospects right out of the gate, with previous names like AJ McKee and Aaron Pico paying off in spades.

Downey, who has had an often tumultuous run outside of wrestling, including assault and robbery charges in 2010, was linked to a fight under the LFA banner last year. The bout never took place; Downey instead competed in submission grappling, going 1-1 for the year.

Ariel Helwani was first to report news of Downey signing with Bellator on Thursday. Bellator President Scott Coker later confirmed the booking, welcoming the wrestler to the promotion. Downey is expected to compete at 185lbs.

Downey later released a statement on social media. “Thank you Scott Coker and Bellator MMA for this new career opportunity. Huge shoutout to everyone who has supported me throughout this tumultuous journey. With that bein said; you Middleweights are f*cked.”

Bellator MMA kicks off its 2022 year with Bellator 273 on January 29 at the Footprint Center in Phoenix, AZ. Ryan Bader and Valentin Moldavsky will unify the promotion’s heavyweight title in the main event. 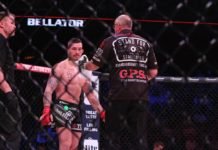