A banger of a welterweight matchup has been added to UFC Montevideo as its co-main event with Vicente Luque fighting Mike Perry.

Mike Perry announced his fight with Vicente Luque on Instagram.

Vicente Luque is one of the hottest welterweights in the promotion, and he’ll look to continue his run at UFC Montevideo in the co-main event against the always-exciting Mike Perry. Both Perry and Luque have three post-fight bonuses to their name.

Vicente Luque is carving a path to the welterweight title picture in very impressive fashion. The American-born Brazilian has won nine of his last 10 fights with the lone loss coming to top contender Leon Edwards. All of Luque’s wins in the Octagon have come by stoppage, with three submissions and six knockouts. In 2019, Luque defeated Bryan Barberena in a fight of the year candidate, then knocked out a short-notice opponent in Derrick Krantz.

Mike Perry has not been as successful, and had come into 2019 with losses in three of his last four fights. “Platinum” turned it around with a Fight of the Night victory over Alex Oliveira in April. While his first four wins with the promotion were knockout victories, the Florida native has won by decision in his last two victories.

UFC Montevideo will take place on August 10 at Antel Arena in Uruguay. The main event is a flyweight title fight between champion Valentina Shevchenko and former bantamweight title contender Liz Carmouche. The fight is a rematch of a 2010 fight which Carmouche won due to a cut on the face of Shevchenko. 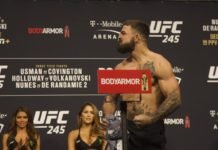 Mike Perry Publicly Insults Michael Jai White with the N-Word, and No One Seems to Care