The second week of this year’s Contender Series has seen a main event change-up, with Alton Cunningham vs. Tony Johnson now topping the card.

Call it the season three curse. The season opener of Dana White’s Contender Series had a fight drop off the card last minute, when Leon Shahbazyan had to stop his weight cut. Well, here we are at week two, and a fighter missed weight badly enough for the show to shuffle the deck. That came when Victor Reyna tipped the scales at a whopping 178lbs for his main event fight against Miguel Baeza.

Baeza made weight, but the promotion opted to move the bout, making it the card opener, instead of the closer. At least the bout was saved.

For a full breakdown of all the fights on Tuesday’s card, check out our Week 2 breakdown. For full results, check below throughout the event, where Cageside Press will be on hand. 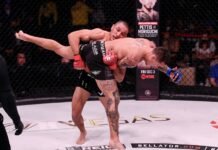 Mickey Gall vs. Mike Malott Lined Up for UFC 273