As EPSN’s streaming service continues to grow, Dana White expects the UFC to grow right along with it.

“I can do any style of fighting in here. I can switch this place out every three hours and do a different fight,” White boasted Tuesday. “We have our own network now, which is global. We have our own facility now, which we can do any style of fighting. We’re getting into all these different businesses. I’ll put on kickboxing, jiu-jitsu, boxing, MMA events, all will come out of there. And other live venues all around the world.”

Big plans moving forward, in other words. But then, “part of the fun for me still is continuing to grow this business,” White, soon to turn 50, admitted. Later, he’d suggest he doesn’t really see a day where he doesn’t want to be in the driver’s seat.

Growing the business means streaming, and White was bullish on that subject Tuesday. Noting that the UFC’s deal with ESPN is for seven years, White said plainly, “streaming is the future. Some people are resisting, they always do in the beginning. But this is where it’s going.”

To illustrate his point, White noted that personally, he has “Cox Cable, and I have DirecTV. I have both. I have a thousand channels. There’s nothing on TV every night when I flip through the channels. I’ve seen this movie a f*cking thousand times. I don’t like this show. I’m never going to watch Lifetime. You start flipping through these channels, right, every one of you right now, I guarantee if you think about it, there’s probably three or four channels that you go to religiously. And those are the channels that you watch.”

That’s where streaming has the edge. “When streaming comes, right — I’ve got cable and satellite. I don’t know what the hell I’m paying for it, but it isn’t cheap. It’s expensive. Now, you can pick three or four of your top channels, or five, and you’re paying five bucks a month. To watch what ever’s on there. And you can go in there and watch whatever you want, whenever you want. It’s the future. That’s where it’s all going.”

Could the PPV business model follow, and become part of such a service, without the $60 price tag? “I don’t know right now.”

Later, discussing the shift from broadcast networks to streaming, White said that “it’s going to be interesting to see how this all shakes on in the next six, seven years.”

It’s easy to forget that ESPN+, where most of the UFC’s content in the U.S. is found these days, is still a very new service. “These guys are the best to ever do it. For a reason. They’re f*cking good and they’re really smart and they’re really pushing the envelope.”

“They have our U.S. rights right now. You know they’re going to go into all these different countries with streaming. ESPN’s going to be available all over the world,” he proclaimed. “And this thing’s just going to grow and get bigger.” 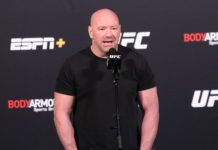