Former Combate Americas bantamweight champion José Alday returned to the win column with an exciting bout in his home in Tucson, Arizona.

Combate Americas had an impressive double-header that delivered as advertised on Friday night as former champion and hometown favorite José Alday took home an exciting victory in Tucson. In the night’s co-main event, Rafa Garcia continued his own impressive streak and set the stage for an exciting Copa Combate later this year.

In March, Alday had a disheartening first-round loss at home that cost him his title. On Friday, he was able to deliver the show previously promised with an exciting battle against Juan Gonzalez. The first round saw a fair bit of action as Alday took control early with an aggressive attack. While “El Pochito” brought more volume, Gonzalez stood his ground and clipped Alday late in the round and unleashed a barrage of punches at the bell. The second round was more even with Alday pushing forward while Gonzalez continued to throw heavy shots. The final round was punctuated by a brief knockdown early for Alday as both men continued to stand and trade.  In the end, Alday took the unanimous decision with scores of 30-27, 30-27, and 29-28.

In his post-fight interview with Jennifer Decker,  Alday addressed the loss in March and his goal to regain the title.

“I didn’t take one day off after that fight. Hats off to Gustavo [Lopez], he went out and did his thing. I wanted to get in here two months ago. Right after that loss I got back at it and I got the win. I want to keep on doing that and get my strap back. I was the ex-champ so I feel like I should be the number one contender. I can’t hold up the division. We already fought two times. I’m pretty sure he’s going to fight once more and I don’t want to be waiting. I need to make my money and buy my son a house. I’m not going to wait but I want that title, don’t get me wrong.”

The company announced that the promotion would be going to Tahoe on August 23 and that current bantamweight champion Gustavo Lopez would be making the first defense of his title on the card. Currently, John Castaneda is expected to be the next challenger although he was not confirmed as Lopez’s opponent. Castaneda defeated Lopez back in 2016 but was ineligible to win the title after missing weight for the fight.

In other action, undefeated contender Rafa “Gifted” Garcia continued his run by stopping Estevan Payán in the first round. The powerful Garcia did damage early with kicks and heavy shots that wore down Payan before eventually catching him with a punch late in the round. Garcia immediately took advantage of the stunned Payan by getting the fight to the ground and taking the back where he secured the rear-naked choke with seconds left.

Combate Americas CEO Campbell McLaren announced that the company’s annual one-night tournament, the Copa Combate, would feature lightweight fighters this year. Garcia is expected to lead the field with Erick Gonzalez as the two are currently tied for most wins at lightweight in the company with six apiece. The tournament is expected to take place late in 2019. 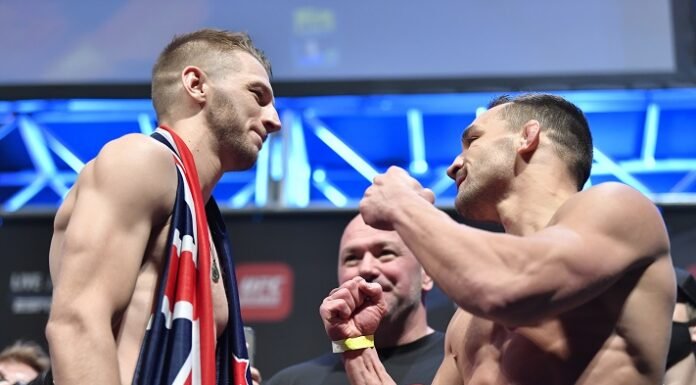