In a card-opening fight between strawweights Genia Goodin and Valerie Wong, it was Goodin getting the nod on the judge’s scorecards at Invicta FC 35.

Invicta FC 35 went down from the Memorial Hall in Kansas City, Kansas on Friday night. Opening up the card, which aired exclusively on UFC Fight Pass, was a strawweight battle between debuting pros Valerie Wong and Genia Goodin. While both were making their professional MMA debuts, both had also found success on the amateur scene.

Goodin, a purple belt in jiu-jitsu who has won several belts in the amateurs, plus a national MMA championship, discussed the fight with Cageside Press ahead Friday’s event.

When the opening bell rang, Wong opened with a kick, and quickly transitioned to a takedown on the taller, lankier Genia Goodin. Goodin, however, reversed along the fence, tying up her opponent. That led to a battle for position, which saw Wong climb up her opponent, looking for a guillotine. That forced the pair to the ground, Wong holding onto the guillotine for a moment before losing it, which allowed Goodin to work from guard.

Wong mixed in heel kicks and elbows from the bottom, which kept Goodin from getting too much offense in. However, she was picking up precious seconds in top time. With just over thirty seconds remaining in the opening frame, the ref stood them back up, and the round ended with a takedown via throw for Goodin.

Round two opened with an early clinch, and Wong was able to get on top, briefly, as the pair went to the ground. Goodin looked to snatch a leg, and Wong then had to spend some time defending a possible leg lock. However, while pursuing that submission, Goodin gave up her neck, and Wong nearly capitalized. However, Goodin pulled free, and wound up back in guard, getting in a bi of ground n’ pound on her opponent. Wong would later try for a triangle, but never came close with it.

The third and final round saw a clinch against the fence early, with Goodin pressing the action, and Wong trying underhooks, then overhooks, to try and peel her off or turn her. Goodin was able to sneak in some short punches during the sequence. Most of the round would play out against the fence, until the final minute, where the ref restarted them. A tired Wong then fired a looping overhand, while Goodin fired a handful of punches before reestablishing the clinch by the fence. From there it went to the judges, who awarded Goodin the split decision. 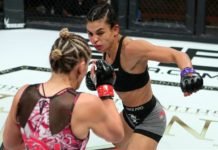 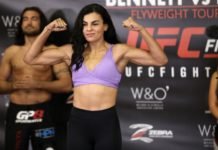 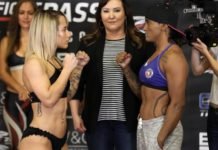