The second fight in on Friday’s Invicta FC 35 card featured atomweights Loma Lookboonmee and Monique Adriane. The action went down in Kansas City, Kansas’ Memorial Hall, airing live on UFC Fight Pass. Lookboonmee was returning to Invicta FC for the first time since January 2018, when she made her pro debut. 2-1 as a pro, she was paired up with Adriane (properly Monique Adriane Azevedo), a 4-1 fighter making her Invicta debut.

Adriane and Lookboonmee opened up with the Thai fighter on the outside. A brief feeling out led to the pair exchanging fire a couple of times. Eventually, Lookboonme, a veteran of 300 or so Muay Thai fights, took the bout to the ground, throwing elbows while in half guard. Adriane held on from the bottom with a body lock; eventually she would escape back to her feet, with about thirty seconds remaining in the round.

Round two saw a slower pace early, with Adriane light on her feet on the outside. Loma Lookboonme focused on the body early; Adriane would later catch a kick and dump Lookboonme on her back. Adriane then went to work inside her opponent’s guard, before backing off, which allowed Lookboonme to jump to her feet. Lookboonmee would later counter a trip, earning a takedown that resulted in a scramble. Lookboonmee would next landed a throw, scoring another takedown, and going back to work from the guard. Not a ton of strikes landed, and Lookboonme allowed the fight to move back up at the end of the frame.

The third frame of Lookboonmee vs. Adriane saw Adriane firing a low kick early, and Lookboonmee trying a teep to the midsection. The Brazilian Adriane would land a good combo punctuated by the left, and attack the legs. Lookboonmee would also work front kicks, and land her right hand. A lead elbow near the final minute was fired by Lookboonmee, and she’d land a final minute takedown. She finished off with some ground n’ pound, and Adriane was slow to get up after, in obvious pain after injuring her ankle on the final takedown.

The judges saw it the same on every scorecard, and Lookboonmee earned the decision. 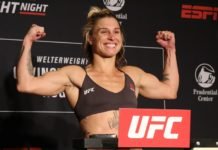 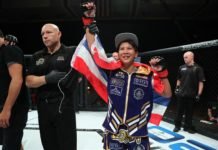 Welcome to the UFC: Loma Lookboonmee