Fighters were set to hit the scales Friday morning for the first, and only, weigh-in for UFC Rochester.

Rochester, NY — The UFC was in Rochester this week, building up to this Saturday’s UFC Rochester: Dos Anjos vs. Lee. A fight that once might have gone down at 155lbs was the welterweight main event of a card thick with storylines linked to weight cutting. Zak Cummings, Sijara Eubanks, Kevin Lee, even newcomer Charles Jourdain were all fighting in higher weight classes than usual. While not all might stick around, it continued a trend seen over the past year or two of fighters finally tiring of grueling, unhealthy weight cuts.

Still, all eyes would be on the scales Friday morning, as the full card weighed in ahead of UFC Rochester. Megan Anderson had a tough cut ahead, and Derrick Krantz was fighting Vincente Luque on short notice.

Who hit, who missed? Check back starting at 9AM ET for live updates from Rochester, as fighters hit the scales for the first and only weigh-in of the day!

No misses Friday – all fighters hit the mark! 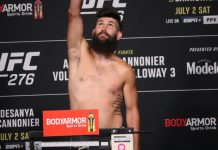