On the first Peek At The Week, we look at the Anthony Johnson arrest, the return of PFL, and Bellator 221 as well as present your fight announcement round up and UFC 237 results.

Former UFC knockout artist Anthony Johnson was arrested last week after an incident with his girlfriend. The pair got into an argument, and Johnson allegedly “put her in a football hold” and moved her to another room so he could leave the house. Johnson admitted to TMZ that he did pick her up a bit, without the intent to hurt her.

PFL returns and debuts on ESPN

Professional Fighters League is back with its second season and officially debuted on ESPN. This year features the first-ever tournament in the women’s lightweight division. The card boasted wins from some of the promotion’s best talent including Kayla Harrison, Magomed Magomedkarimov, Ray Cooper III, and Chris Curtis.

Bellator back in action

Bellator returned to action this weekend touting one of its best cards to date. In the main event, the 145-pound champ, Patricio Pitbull, took on and knocked out Michael Chandler, the 155-pound champion. In little more than a minute, Patricio became a two-weight champ. In the co-main event, Douglas Lima took the chin off of Bellator’s undefeated Michael “Venom” Page, advancing in the Welterweight Grand Prix. Former WWE star Jack Swagger also picked up his second professional win. 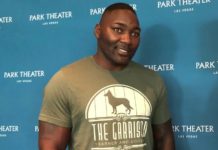