The PFL’s women’s lightweight division is off to a strong start thanks to Sarah Kaufman and Kayla Harrison, who won big at the PFL 2019 season opener on Thursday night.

Kayla Harrison got the biggest test yet of her career at the PFL 2019 season opener, while Sarah Kaufman won big in her promotional debut. PFL 12 (Or PFL 1, as the promotion is calling it, going back to the start for the new season) saw the introduction of the women’s lightweight division. And while the UFC struggles to build a featherweight division, the 155lb women shone Thursday night.

None more so than Canada’s Sarah Kaufman, who pulled off a first-round submission against Morgan Frier, earning her six points towards a playoff berth, and first place in the standings. Kaufman, a former Strikeforce and Invicta FC bantamweight champion, was moving up in weight, looking for a third major title. And a million dollars in prize money at season’s end.

Harrison, the Olympic gold medalist in Judo, is the woman the division was built around. Yet the judoka had never been tested the way she was Thursday night in the PFL 2019 season opener. Larissa Pacheco of Brazil made Harrison go the distance, and even took Harrison’s back at one point, attempting a rear-naked choke.

It was the rare time fans had seen Harrison’s defensive game. She didn’t disappoint, reversing position to get on top. The rest of the fight? Basically one-sided in favor of Kayla Harrison. Still the fight marked the first time she had gone the distance.

Check below for a selection of highlights from PFL 2019 Week 1! For results and a main card recap, we’ve got you covered as well! 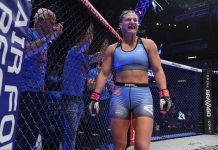 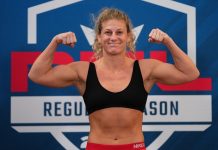