Opening up the UFC 237 card will be a promotional debut for Melissa Gatto, who takes on Talita Bernardo on short notice.

The UFC is coming to Rio de Janeiro, Brazil on May 11 in the Jeunesse Arena. The card is full with Rose Namajunas defending her strawweight title against Jessica Andrade, and also has legends, rising talent, and two debuts. One of those being Melissa Gatto who is stepping in short notice for Jessica-Rose Clark, who pulled out due to injury. Gatto will now fight Talita Bernardo.

How Does Melissa Gatto Fare in the UFC:

Melissa Gatto is still very young and still very green, not at all being ready for the UFC. The Brazilian has some major holes on the feet. Offensively on the feet she really doesn’t do anything to be any kind of threat. Defensively, she keeps her hands low and throws single kicks and lacks footwork and movement altogether. Gatto has four submissions as the mat is no doubt where she is most comfortable. Usually, it’s her getting taken down and her getting top position or getting a submission off her back after a while.  Overall, a subpar signing from the UFC.

How Gatto Matches Up with Talita Bernardo:

Both of these women have problems on the feet, but both are very similar fighters. Bernardo I believe is better everywhere the fight takes place. Gatto has shown her wrestling nor her takedown defense isn’t all that good and Bernardo is solid with her wrestling. Gatto has shown she isn’t too good off her back and had problems off her back against lesser competition. Bernardo does have stronger top positions and better jiu-jitsu as a whole. If the fight was on the feet, Bernardo has at least shown good aggression and throws with better technique. 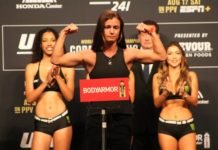