UFC Rochester will mark the promotional debut of Canadian prospect Charles Jourdain, who will be fighting a weight class higher.

The UFC is coming to Rochester, New York, on May 18. The event will be held in the Blue Cross Arena. The card is set with 12 bouts headlined by Kevin Lee and Rafael dos Anjos. The card also has four debuting fighters and many rising up-and-comers. Rochester’s own Des Green (22-8 MMA, 3-3 UFC) would get his wish to be on the card. He will take on newcomer Charles Jourdain.

How Charles Jourdain Fares in the UFC:

Charles Jourdain is only 23-years-old but has fought some good competition beating Will Romero, Alec Morgan, and Damien Lapilus. His only loss is to another top Canadian prospect in TJ Laramie. His weakness would have to be off his back and his takedown defense against a good wrestler. It wasn’t too long ago that TJ Laramie took Jourdain down at will and dominated on top for five rounds. He struggled off his back against Laramie so in the UFC against a more high profile wrestler, he could be in trouble.

Offensively, Jourdain is extremely gifted. He doesn’t tend to wrestle but on top, he’s really talented with hunting for submissions and transitions. On the feet is where he does his best work. “Air” Jourdain loves to throw caution to the wind and that includes a jumping roundhouse kick and definitely the flying knee. He meshes in his kicks and strikes very well and his speed is a big factor. Jourdain throws in flurries throwing from a lot of different angles throwing at an unpredictable output. He also has solid cardio and can fight at a solid pace, especially for three rounds. Overall, I think this is a great signing by the UFC as he will develop well in the promotion. I do expect him to be a top contender but no time soon just because he’s so young and will fight top competition.

A perfect spinning back fist is the beginning of the end, and we have a new #TKOMMA featherweight champion!!

Charles Jourdain hops the fence and grabs the belt himself! #TKO45 pic.twitter.com/wySTxEOA97

How Charles Jourdain Matches Up with Des Green:

Green is the much more experienced fighter with 20 more pro fights than Jourdain. Green has also easily fought much better competition. It’s tough matchmaking because Green needs someone more established in the UFC and Jourdain needs someone more on his level. Regardless, Green needed an opponent for this card and we are left with this fight. Jourdain could very well beat Green because he’s much faster, he does a lot more, and he’s just really dangerous on the feet. Green is more technical and fights behind the jab that could possibly give Jourdain issues. If Green fights smart, which he tends to do, he will just wrestle Jourdain because that is where Jourdain struggles. I like Jourdain, but this is a tough fight for him to make his debut on. Another factor is this is at lightweight, and I like Jourdain at featherweight much better. 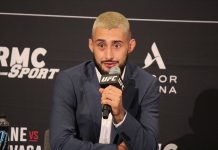