By the third round of his battle against Marc-Andre Barriault at UFC Ottawa, Andrew Sanchez was running on heart. But after being “born in that fire” through years of wrestling, he was ready for the tough, grueling fight he experienced Saturday.

Ottawa, ON — Andrew Sanchez seemed a little overwhelmed by the media presence following his win over Canada’s Marc-Andre Barriault at UFC Ottawa on Saturday night.

You’d think a guy who won The Ultimate Fighter would be used to the cameras. You’d be wrong. Sanchez isn’t that guy. Not a limelight seeker, at least. Sanchez seems to treat the spotlight the same way he treats fighting: he’s guts it out.

That was the case in the octagon on Saturday at the Canadian Tire Centre. Sanchez was welcoming Barriault, a two-division champ in TKO, to the promotion. Not an easy task, in enemy territory. His opponent was no rookie. Yet he got the job done — but not without some struggles.

“The first, everything was going nice and smooth, relaxed, I thought I won it pretty clearly,” he recalled. “The second, Jesus man, it’s just a big blur, bobbled my head around, man, he rocked me. I was tired, and mentally, I was questioning, ‘f*ck, can I make it through this?’ That third round, was all heart man. That’s all I can say about that. I knew it was 1-1, I knew we were both tired.”

As Sanchez put it next, however, “I was born in that fire. [I spent] my whole life wrestling, and used to those long grinding kind of competitions. He gave it all he had, but I’m just more comfortable in that fatigued, just devastated, exhausted state. Pulled it out, but it was all heart in that third round. He hurt me, he hurt me in the second.”

“Afterwards, it’s like man, it’s a hellacious experience, and coming out on top, it’s good man. I just went through hell and it was all worth it.” He didn’t expect it to go any other way. “Going into it, I know it’s going to suck and I know with that style with the grinding wrestling, you have to be in tremendous shape. So that makes my life a living hell. I have to train so hard. I feel like I’ve done more this camp than I have ever. Running at seven in the morning for three days. I knew it was going to be a tough fight. I had a feeling it would go all 15 minutes because he’s hard to put away. He’s a very tough guy.”

The two had sparred before, which gave him a taste. However, now training with Montreal’s TriStar, Sanchez is hitting new heights.

On concerns of judging when fighting locals, Sanchez admitted that “that’s always in the back of my head. He had a huge crowd here. I was surprised. I knew he had a lot of fans but that crowd was roaring for him. He’s not even from Ottawa. He’s from Quebec. So I was thinking that, like, ‘Who’s my ref? Is he Canadian?’ These things always pop in your head, but at the end of the day, you can’t think about that, you just have to focus on getting it done in there and performing and doing your best. You can’t help all that stuff.”

The TriStar edge, however, Sanchez sees as huge. “Training at Tristar and the whole team there, Conrad Pla, Firas Zahabi, my god. Just Montreal, in general, is a gold mine for MMA and combat sports with Montreal’s wrestling. I could go on forever. I really learned to trust the process,” he said. “I’ve been to a lot of gyms and a lot of coaches and I’ve never trusted my coaches like I have at Tristar. So I just leave it in their hands and trust and work my ass off and the rest, just let it go. Instead of worrying myself sick, I’m a bit of an over-thinker when it comes to fighting and everything in life, so just let it be.”

One thing he kept constant, coming into the fight, was the awareness that his opponent was a real threat, UFC debut or not. “I made it a point not to underestimate the guy. I did get the better of him. I took him down, controlled him, I beat him on the feet. But I’ve underestimated guys in the past and it never works out good. My coach Conrad every day was like, ‘This guy is going to bring it. Don’t expect a finish. It’s going to be 15 hard minutes. You’re going to question yourself.’ Very repetitive statements, sinking that into my brain.” They paid off in the end. “So thank god for that, because if I came in underestimating this guy, I would’ve lost that fight.”

“The harder the struggle, the greater the reward,” Sanchez added. “If it was just a breeze and I was having fun, I win a fight, ‘Cool.’ But because it’s so brutal in my mind, when I win it’s the most incredible feeling of relief. I’m so happy. It’s all worth it.”

As for all the media present, “it’s just cool man,” Sanchez stated. “It’s just different. I’m not a big ‘look at me’ kind of guy. I just put my head down, train hard, do my thing. Now I’m here in the UFC on the big stage, cameras, this and that. Whoa. I’m just a very humble, chill guy.” 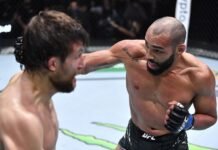