It isn’t often that losing fighters face the media in their promotional debut, but that is exactly what Marc-Andre Barriault did at UFC Ottawa over the weekend.

Ottawa, ON — Losing is never easy. Doubly so when the world is watching. While that may seem like an exaggeration in the case of Marc-Andre Barriault, the reality is, there was a ton of interest in his promotional debut at UFC Ottawa over the weekend. So much so that the UFC had him face the cameras after his loss, a rare occurrence for a fighter not at the top of the card.

Media from across Canada, most notably his native Quebec, however, had turned out to see him step in the octagon for the first time. The double-champ from TKO, who had won gold at light heavyweight and middleweight, was set to take on TUF 23 winner Andrew Sanchez.

The fight didn’t go his way. It was a close one, to be certain. He dominated the second round, had Sanchez hurt. But Sanchez had won the first, and gutted it out in the third. On judge’s decision, Barriault told reporters after the fight that it was “a little bit [surprising]. But it’s frustrating. At first it was frustrating, but I love what I do. At the end of the day, the judges decided that he won.”

The near-finish in the second would have resulted in a very different narrative. Sanchez surviving it was unexpected, ‘Power Bar’ said. “I was very surprised. He was very tough. But, he waited for a counter shot so he could grab me and take the time to just to hope he was not down.”

“I’m very proud of myself,” he said of his performance overall. “I just need to look at it and continue to work on everything. I know that they’ll do the same thing the next fight because when I touch it can be dangerous.”

Rest assured, any octagon jitters were not to blame. “It was not the nerves, it was mostly just the fact that I was in there with all the crowd. I enjoyed the moment but that was time to just, ‘ok, let’s go.'” As for when he’d like to get back in there, “I’d like to be back as soon as possible,” Barriault said.

“I was on an eight-fight win streak, so now I just need to settle everything, recompose, and just go with the next one.”

As noted, speaking to the media after a loss is usually a duty reserved for co-main or main event fighters. However, Barriault told reporters afterward that “I’m a generous guy and I need to practice my English as well. I like the fight game, I enjoyed everything on the fight week. It’s me, it’s my personality.” 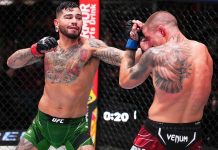