Utilizing his grappling skills, Andrew Sanchez won the decisive third round, giving him the unanimous decision win over Marc-Andre Barriault at UFC Ottawa.

Andrew Sanchez is a two-time Division II National Champion wrestler who’s transitioned those skills successfully to MMA. “El Dirte” was invited to The Ultimate Fighter 23 after going 7-2 with losses to UFC vets Kevin Casey and Dustin Jacoby. Sanchez went 3-0 on the show then defeated Khalil Rountree in the finale to win the tournament. He then dropped down to middleweight and is 2-2 since then, coming off a victory against Markus Perez.

Marc-Andre Barriault is a top Canadian prospect who simultaneously held the middleweight and light heavyweight titles in TKO before signing with the UFC. “Power Bar” is currently on an eight-fight win streak, knocking out his last two opponents. Of his 11 wins, Barriault holds eight striking stoppages.

A minute into round one and Sanchez shoots in and completes the single leg takedown. Sanchez grinded Barriault for a little over a minute until Barriault worked back to his feet. Another takedown from Sanchez but this time Barriault bounces right back up. The round ends on the feet with Sanchez flaring kicks.

Cageside Press scores round one 10-9 for Sanchez.

Round two Sanchez starts with kicks to maintain the distance but did shoot for another single leg as Barriault shrugged it off. Barriault just throwing that overhand right but with no setups. He’s coming up short. Barriault has a good moment getting the clinch landing striker to the body and some big uppercuts. Barriault changed the momentum landing the one-two a few times. Sanchez ended the round in danger and completely gassed. 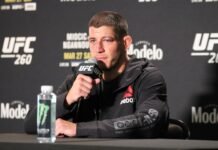