A pair of solid fights have been added to UFC Greenville, with Randy Brown facing the always-exciting Bryan Barberena, and Andre Ewell taking on Anderson dos Santos.

Bryan Barberena’s 5-4 UFC record may not be the most impressive, but he is guaranteed excitement with a pair of Fight of the Night bonuses and four stoppage victories. His signature victory came against Sage Northcutt, when he upset the then-prospect with an arm-triangle choke.

Randy Brown was found on Lookin’ for a Fight, when he won by first-round knockout in front of Dana White to earn a shot at the UFC. He is 4-3 with a win over Mickey Gall, but has lost two of his last three.

Andre Ewell is 14-5 in his career and made his promotional debut in a big way by defeating former champion Renan Barao in September. He is looking to rebound from a loss to British prospect Nathaniel Wood.

Anderson dos Santos debuted in November with a 20-6 record but was defeated by Nad Narimani. He is a former Titan FC champion and holds a win over Ricky Simon.

UFC Greenville takes place on June 22 from the Bon Secours Wellness Arena in South Carolina. There is currently no main event announced, but in addition to the two fights above, the card stands as follows: 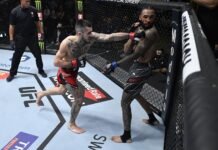