Another promising bout for the upcoming season of Dana White’s Tuesday Night Contender Series is in the works. On Tuesday, a source familiar with the situation confirmed to Cageside Press an earlier report by BJPenn.com that Terrance McKinney would appear on the Vegas-based show in July. His opponent that night will be Adli Edwards. Both fighters will enter the night with professional records of 6-1. Thus far in his career, McKinney has never gone the distance.

The fight is expected to take place at featherweight, though McKinney has fought at both lightweight and welterweight in the past.

McKinney, who trains alongside the likes of UFC athletes Austin Arnett and Michael Chiesa at Sikjitsu in Washington, started his career at 4-0 until a leg injury TKO halted his winning streak. He has bounced back with two wins, however, most recently against Bobby McIntyre at Front Street Fights 19. ‘T.Wrecks’ will look to make it three straight, and a UFC contract on top of that, when he steps into the cage in the biggest fight of his career to date.

North Carolina’s Edwards, meanwhile, is on a four fight winning streak, the last two coming via decision. The 29-year old nicknamed ‘Sunshine’ also put several years in as an amateur.

This particular Contender Series scrap is expected to go down July 23, 2019. 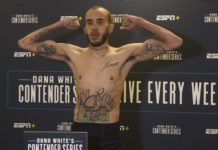 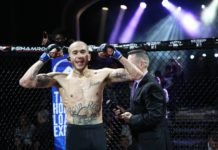