Bellator MMA’s frequent visitation to what many know as “The Shark Tank” is almost always synonomous with highly-anticipated fight cards. This past weekend, the SAP Center saw no different as Bellator 220 took place in San Jose, California. The fight card delivered a frenzy of finishes throughout most of the night, however, ultimately failed to deliver a climactic ending with it’s main and co-main event results leaving a lot left to be desired. That being said, certain situations involved have created a somewhat easier task for the matchmaker. That is the very role I have taken upon myself today, as I give you my take on which fights make sense gong forward for Bellator 220’s main card fighters.

Some moments were more exciting than others, but the back-and-forth nature in which Rory MacDonald and Jon Fitch fought on Saturday night ultimately materialized in a majority draw. Despite Fitch being the only one seen as a clear winner by any of the three judges, MacDonald’s status as welterweight champion of the promotion sees him propelled into the semifinals of the grand prix. MacDonald’s semifinal bout is already booked for June 14 at Madison Square Garden, where he’ll meet the undefeated jiu-jitsu prodigy Neiman Gracie.

Jon Fitch’s current situation is, well, just a flat out bummer. Fitch’s winning scorecard was overruled by the majority of the three on Saturday, and the fight was scored a majority draw. The fight’s overall excitement didn’t leave fans screaming for a rematch, but the championship stakes that came with it surely result in several unanswered questions. Unfortunately for Fitch, the tournament format leaves this option off the table. Fitch has lobbed the idea of retirement into open existence, however, should he opt to continue his career Lorenz Larkin makes plenty of sense for him next. Larkin currently serves as the Bellator welterweight tournament alternate after defeating Ion Pascu at Bellator 207 last November.

Bellator’s favorite Hawaiian sweetheart seemed to have met her match Saturday, as Veta Arteaga appeared to be an incredibly game opponent for Ilima-Lei Macfarlane through two rounds. In round three, Macfarlane ended up in Arteaga’s guard and landed an absolutely thunderous elbow that split her forehead wide open. The fight was stopped just moments later, and by reccomendation of the doctor Macfarlane had defended her title for the third time. An immediate rematch for Arteaga makes a lot of sense here, as she gave Macfarlane one of, if not the toughest challenge so far throughout her reign as champion.

Arteaga looked to have amounted some solid work against the champ at the beginning of the fight, making the way it had to end even more disappointing. The cut on Arteaga’s forehead was so severe, that once the referee saw an opportunity he paused the action before the doctor ultimately called the bout moments later. Macfarlane herself, as well as Scott Coker have already hinted at the notion of a rematch. In addition, astonishingly 13 of 18 women’s Flyweights on Bellator’s roster are coming off a loss, which means Bellator needs to buy some more time to develop the next worthy contender. Booking the rematch does just that.

In a high-paced, action-packed 15 minute teeter-totter of momentum, Benson Henderson ultimately reigned victorious over Adam Piccolotti by split decision. Henderson stretches a personal best win streak for the promotion to three, nearly three and a half years since his first encounter with current lightweight champion Michael Chandler. Henderson lost that fight by split decision, as well as his next fight against Patricky Pitbull. With Michael Chandler set to handle his dispute with Patricio Pitbull in just over ten days time, having Henderson and the older of the two Pitbull brothers run it back seems to make sense to determine the de facto number one contender.

Many fans were unsure of the exact level of development Adam Piccolotti had experienced coming into this fight with Henderson. Piccolotti more than held his own, having multiple opportunities to finish the fight throughout. Though many fans were calling the decision the incorrect one, Piccolotti’s failure to secure submissions throughout ultimately cost him the result he so desperately desired. Piccolotti may or may not have been on the verge of a title opportunity, and Brent Primus as a former champion of the promotion gives a good measuring stick for Piccolotti should he get past Tim Wilde this weekend in Birmingham.

Phil Davis made sure he had a quicker night at the office against Liam McGeary this time around, really showing off just how far his striking has ultimately come en route to a third round TKO of Liam McGeary. Their first bout took place in November 2016, and the improvements in Davis’ game on the feet are very noticeable at this point. The situation with Ryan Bader is light heavyweight champion is somewhat of a slippery slope, with President Scott Coker stating on the record that Bader’s next fight will take place against Cheick Kongo at Heavyweight. This division is as thin as any on Bellator’s roster and doesn’t have many options for Davis going forward. The winner of this Madison Square Garden headliner will make a lot of sense for Davis regardless if it’s the Lyoto Machida rematch or Chael Sonnen.

Former champion Liam McGeary finally got back in the win column for the first time in nearly two years last December when he put Muhammed ‘King Mo’ Lawal away with strikes less than a minute into round three. Unfortunately for McGeary, he could not continue his momentum as he dropped his second in as many fights to fellow former champ Phil Davis. McGeary, like Davis, is short on options for his next fight with 205 pounds having very little depth on Bellator’s roster. A couple of fresh matchups for McGeary can be found in Melvin Manhoef and british upstart Kent Kauppinen are set to throw down on the main card of Bellator 223 on June 22 in London.

Gaston Bolaños once again showed his supreme level of power at 145 pounds, scoring yet another first-round stoppage by defeating Nathan Stolen by TKO on Saturday night. The win prolonged Bolanos’ stretch to open his career with a 100% finish rate, and was his fourth finish inside the opening stanza of his six pro victories. It’s obvious the promotion sees something in Bolaños, as this fight made it back-to-back main card billings for the Peruvian-American prospect. The promotion is taking their sweet time building him up, giving him exclusively promotional newcomers up until the Stolen fight, with Stolen being 0-1 for the promotion. Bolaños is still in the early stages of his career, so I’m prompted to believe that trend will continue into his next appearance.

Nathan Stolen: Fight Outside the Promotion

Nathan Stolen seemed to find some sort of success in the initial exchanges, but ultimately fell to a left hook before being saved just moments later by the referee to avoid further damage. This was Stolen’s second fight for the promotion, and was on the heels of an opening-round submission loss to Andrew Cruz at Bellator 205 last summer. Stolen’s placement on the card was clearly predicated to Bolaños being his opponent, and having lost four of his last five you’d think Bellator might lean towards severing ties with him going forward. 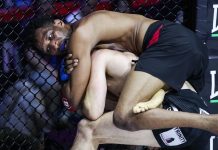