Sunday Morning Cornerman is back, with the boys combing through the action that went down in Florida at UFC Fort Lauderdale Saturday night, including a Fight of the Night performance from Mike Perry, and the upset of Jacare Souza by Jack Hermansson.

From the prelims on up, there was plenty of star power at the event, also known as UFC Fight Night 150. Including names like Angela Hill (former Invicta FC champ), Court McGee (TUF champ), and lightweight veteran Jim Miller (most UFC fights, most lightweight subs) on the early prelims.

There were surprises a plenty as well, especially in the main event, with the aforementioned upset of the legendary Jacare. Perhaps, however, we shouldn’t be surprised by the outcome, after ‘The Joker’ made short work of ex-two division WSOF champ David Branch just last month.

With Kelvin Gastelum coming off a loss, Yoel Romero dealing with injury/illness, Chris Weidman coming off a loss to Jacare, and Israel Adesanya set to face Robert Whittaker for the belt, it feels like Jack Hermansson is suddenly knocking on the door of a title shot. At the very least, he’s made a case for being next in line for the winner of Whittaker vs. Adesanya.

Sunday Morning Cornerman tackles that and more this week – watch the full episode below!

UFC: Greg Hardy vs. Maurice Greene Lined Up for October 31 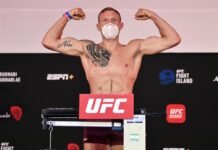 Bellator 249: Will Cyborg Roll or Will Blencowe Make History?