Titan FC returned for their 54th show on April 26, 2019 as Featherweight gold and interim lightweight gold were up for grabs. Check out the full results below.

In the main event of the evening, undefeated and current featherweight champion Jason Soares takes on Brazilian challenger Ariston Franca, who took the bout on short notice. Soares, will be making his second defence of belt, since winning it back at Titan FC 49 against Luis Gomez. Most recently, Soares brutally knocked out Caio Uruguai at Titan FC 52 in the very first round for the first defence of his title. With a victory, Soares is likely to be signed to the UFC. His opponent, Franca, is a regional veteran who has a 90% finish rate. Franca is currently riding a two-fight win streak.

In the co-main event, Brazilians battle each other for interim lightweight gold as Rafael Alves faces Felipe Douglas. Alves, is coming off three-straight wins, two of which inside the Titan FC cage. After defeating Guilherme Miranda via unanimous decision in his Titan FC debut at Titan FC 49, Alves submitted Beibit Nazarov in the third-round to earn a shot at gold. His opponent, Douglas has won his last four bouts, most recently defeating UFC veteran Yosdenis Cedeno via unanimous decision in February.

Also on the card, the brother of UFC lightweight Gilbert Burns, Herbert faces former Titan FC featherweight champion and the only man to hold a victory over Sodiq Yusuff, Luis Gomez in a fan-friendly featherweight brawl. The undercard also includes UFC veterans Marcel Fortuna and Marc Stevens, and the debut of AKA product Jimmy Lawson.

UFC president Dana White is in attendance for the event, for his Lookin’ for a fight YouTube series. 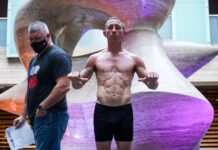 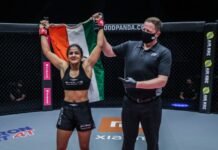