The best spot for MMA prospects this week is unquestionably ACA, with several interesting talents in action on Friday.

Limberger is well-rounded but he may be better on the feet. He’s shown one-punch knockout power but his high volume output is where he excels. Limberger throws one-twos from a variety of angles, almost never throwing just one strike, and mixes in kicks beautifully. He is an excellent range fighter with great footwork and perfectly-timed counters. He uses leg kicks as one of his main weapons and does a good job switching to spinning kicks that are neither sloppy nor telegraphed at all. Limberger has underrated wrestling, as he has great timing on his double leg and he sets it up and executes perfectly. On the mat, you can’t ask for much more: he possesses good BJJ on top or off of his back. He fights Dzhikhad Yunusov (17-5).

Matevosyan is an underrated 205’er born in Armenia. He dropped his first two pro fights and since then has won his next eight contests. Matevosyan will march forward with heavy attacks. He has good kickboxing with chopping leg kicks and will go high as well. He’s really good in the clinch and very good when breaking from the clinch. Matevosyan does need work with takedown defense but at least he’s always been able to fight his way back. He has a good gas tank which has made a big difference in his career. He fights Artur Astakhov (19-6).

Vakhaev is a talented heavyweight at only 27-years-old. He a striker who understands distance management. He throws good long punches and kicks and does an excellent job coming in with strikes and knees in the clinch. He’s shown to be a well-equipped counter striker making opponents pay when they rush in on him. Vakhaev stays calm and picks his shots while conserving his energy well. He fights Roggers Souza (10-2).

Zulaev is a legit up-and-coming Russian prospect. On the feet, he is excellent at distance using a range of kicks, even spinning kicks, often. The Russian is a skilled kickboxer with explosiveness, falling in love with his flying knee. Some other nice qualities he has are solid cardio given the pace he throws at, and excellent takedown defense. Zulaev has some decent wrestling, but his ground and pound is cutting with the elbows he throws. He fights Ramazan Kishev at ACA 117.

Umakhanov wasn’t someone I was all to familiar with until recently. He has an impressive record and has beat good fighters in the last three years. He’s got a decent ground game and a good wrestling base but is a much more confident striker. Umakhanov fights long. He has a good jab, uses a lot of teep kicks, and a sniper-like one-two. Umakhanov has excellent hands. He fights Zhorabek Tesheboev (7-1).

Gumienna is only three fights into her career and is already 31-years-old but has tons of experience in kickboxing. She’s a gold medalist of the K1 World Cup in 2014, 2015, and 2017. She is also a WAKO Polish championship in K1 and a lot of good experience as an amateur. So far she has finished all three of her opponents in MMA using her muay thai, kick boxing, long strikes, and range. She fights Ekaterina Shakalova (3-1).

Sabatello, with an impressive 9-1 record in MMA, made his name in wrestling. He’s a three-time NCAA Championships qualifier and a two-time 141-pound Big Ten Championship winner. He’s an insanely good wrestler with frantic forward pressure, and he has a high pace he puts on until the finish or a decision. He would be a huge problem for a lot of guys in the UFC. He fights Da’Mon Blackshear (8-3).

Moore first jumped out to me when he beat a good prospect in Nation Gibrick a year ago. He has experience in grappling and as a pro boxer. His last three fights have been good showings for LFA. Moore is good on the feet but his grappling is game-changing and has solid wrestling. He fights Ago Huskić (8-2). 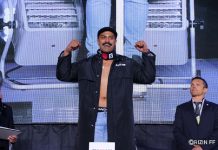