Jiri Prochazka is a very dangerous fighter, finishing 22 of his 23 wins with only one leaving the first round. He is great at putting pressure on his opponents with a lot of volume, and really excels at putting together his kicks and punches with fluidity. Along with being such a dangerous striker, Prochazka is extremely athletic and he loves to launch himself in the air with flying knees. Prochazka is arguably the best light heavyweight prospect in the world due to his impressive list of accomplishments and having fought so many great talents at a young age of 26. At 6’4″, Jiri is a massive fighter and he uses his height to his advantage, throwing leg kicks and knees at various ranges. He fights the well-known Muhammed Lawal (21-8) who Jiri has lost to. This is a big fight for Jiri.

Mikuru Asakura is an exciting prospect who has steamrolled all but one of his opponents. Asakura is a very adept grappler who has some proficient judo/wrestling, along with exceptional jiu-jitsu. Having said that, on the feet is where Asakura is most dangerous. Holding huge knockout power, you could describe Asakura as having dynamite in his hands. He uses that innate power with good set-up technique including counters and feints. He is a sniper with explosiveness. He fights Luiz Gustavo (9-0).

Gustavo is a protege of MMA legend Wanderlei Silva. “Killer” has a 100% finish rate with four KO/TKO and five submissions. He’s very aggressive, but very wild as well. He will storm forward with big looping hooks. He does have a lot of power though, so if he connects with his punches his foes will be in some trouble. The Brazilian has some wrestling as well and is better once on the mat. He transitions into the mount fairly easy thus far in his career. I’m not too sold on him though, because his defense and cardio aren’t ideal. He fights Mikuru Asakura (9-1).

Karl Albrektsson has only two losses in his career, both to stellar prospects Valentin Moldavsky and Jiri Prochazka. He has also beaten good competition such as former UFC fighter Josh Stansbury and top Bellator contender Vadim Nemkov. “King” has a background in BJJ and in Sanshou, in which he was the 2014 European champion. Albrektsson is well-rounded but more so a strong grappler. He’s only 25, and is only getting better. The UFC goes to Europe quite often and Albrektsson should be someone there looking at. He fights Christiano Frohlich (10-4) who Karl should beat.

The prospect out of Japan is the current DEEP Impact lightweight champion. He’s well-rounded with submission wins and TKO wins, although he has gone the distance four times. On the feet, Takeda has an excellent jab and fights behind it very well. He doesn’t have the power, but it’s the accumulation of strikes he lands which is fantastic. He’s just so technical on the feet and is also a good wrestler/grappler and can do it the whole distance of the fight. He fights former UFC fighter, Damien Brown (18-12) which is a big test for Koji. 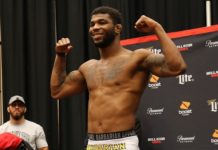 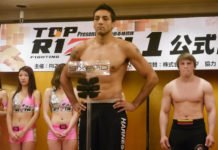