Leon Shahbazyan will look to join his younger brother in the UFC when he takes on Brok Weaver on the Contender Series on June 18.

The big hit show, Dana White’s Tuesday Night Contender Series, is back for a third season this summer. Contracts have been sent out and many fights have already been confirmed. Sources have now confirmed to Cageside Press that a welterweight bout between Leon Shahbazyan and Brok Weaver will go down on June 18.

Shahbazyan is 7-1 as a pro who is now on a two-fight win streak. Leon has a 100-percent finish rate with six finishes in the first round.  He’s only 23-years-old, standing 6’4″ with more than a 77-inch reach.

Standing across from Shahbazyan will be 13-4 Brok Weaver. Fighting out of McIntosh, Alabama, Weaver has 18 total pro fights. He’s had a few fights not go his way but he’s now on a six-fight win streak.

Weaver has beat the well known Charles “Crazy Horse” Bennett, and a pair of Contender Series alums in Tyler Hill and Max Mustaki. He’s a 10-fight veteran for Island Fights out of Florida. 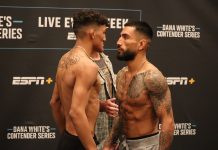