Karolina Kowalkiewicz is looking to get back to her winning ways, and fast. Following back-to-back losses to Michelle Waterson and Jessica Andrade, she’s planning to hop back in the octagon quickly. That loss to Waterson was only ten days ago, and now she’s booked for another bout. This time against the returning Alexa Grasso at UFC 238. The UFC announced the news Tuesday.

Straight back in there!

Karolina started her career off 10-0, and was one of three championship bouts on the UFC’s first fight card in New York, that being UFC 205. Although she came up short in that fight against Joanna Jedrzejczyk, the future still seemed bright for the Polish fighter. Unfortunately, since starting her career undefeated she has gone 2-4 in her last six fights. Prior to her current skid, however, she was on a short list of potential title challengers for strawweight champion Rose Namajunas.

Her opponent at UFC 238 has had a similar career path to her own. Alexa Grasso started off 9-0, and debuted in the UFC with a win over Heather Jo Clark. However since that victory, she has gone 1-2, her last loss via a quick first-round submission to Tatiana Suarez in May of 2018. Grasso was originally scheduled for her return against Marina Rodriguez at UFC Philly last month but withdrew due to injury. Since her fight with Suarez, she’s had to pull out of three different fights citing injuries.

UFC 238 is scheduled for June 8, from the United Center in Chicago, Illinois. The card features two championship bouts, as Henry Cejudo moves up in weight to fight Marlon Moraes for the vacant bantamweight championship in the main event. The co-main event has Valentina Schevchenko defending her flyweight title against Jessica Eye. 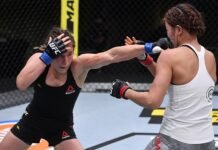