Sonnen vs. Machida is on tap for Bellator’s return to Madison Square Garden this June, according to a report by ESPN.

Chael Sonnen and Lyoto Machida have been linked for a fight for a bit. Now, it appears they have a date. Early Thursday, ESPN reported that the former UFC stars were set to appear at Bellator MMA’s return to Madison Square Garden in June. The pair would be a suitable main event for the card, as Chael headlined the promotion’s previous trip to the storied venue, against Wanderlei Silva. The contest is expected to take place at light heavyweight.

Sonnen (31-16, 1 NC) has worked as an ESPN analyst and podcast host, as well as an analyst for Bellator, all while juggling his fighting career. He last competed against Fedor Emelianenko in the semi-final of the Heavyweight Grand Prix. Fedor finished ‘The American Gangster’ in just under a round. Prior to that, however, Sonnen had won two straight against Wanderlei Silva and Rampage Jackson. Currently, Sonnen is 2-2 with Bellator.

Lyoto Machida (25-8), the former UFC light heavyweight champ and middleweight title challenger, won his Bellator debut in December at Bellator 213. He won a split decision over Rafael Carvalho to extend his win streak to three, split between his new home and the UFC.

Machida holds a win over Bellator light heavyweight (and heavyweight) champ Ryan Bader, from their meeting in the UFC back in 2012. A four fight win streak would put him at the top of the list of potential contenders in the weight class, given the relative lack of challengers to Bader at 205lbs.

Bellator’s return to New York City goes down on June 14. It’s their first show at MSG since the 2017 event topped by Sonnen vs. Silva. 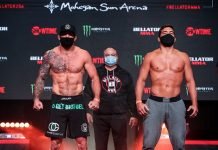 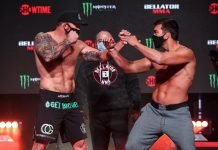