The Contender Series is set to return, now airing on ESPN+ — but which prospects are likely to turn up on the third installment of the show?

Dana White’s Tuesday Night Contender Series was recently confirmed as returning for a third season, not that there was ever any question. As an entry path into the UFC, the show has proven popular thus far. The third season will kick off in June or July, and interest should be high.

In this piece, we feature 25 prospects believed worthy of a spot on the Contender Series Season 3. Left out will be fighters that fought on the previous two seasons, though some may return.

It’s seems crazy that Raufeon Stots isn’t on the big stage yet because he is simply too good for the regional circuit. Stots is now signed with LFA and is not even fighting for their title. Fighting for a brand like LFA though will only increase his shot at making it on this season. His only loss is to UFC fighter Merab Dvalishvili, but in his own right, he has some good wins over tough regional competition. Stots is a former NCAA Division II wrestling national champion at the University of Nebraska at Kearney. He’s well-rounded and one of the best bantamweight prospects in the US. “Supa” is also training out of a top camp in Roufusport MMA.

Miles Johns is a product out of the rising camp that is Fortis MMA. Johns is another LFA fighter who is 5-0 with the promotion including Legacy FC fights. Accurately labeled as a boxer/wrestler, Johns is very well-rounded. How great would it be to have Johns fight Raufeon Stots headlining a Contender Series episode? Check out a more in-depth preview on Johns from when he was 7-0 here.

Christien Savoie was contracted to fight on the Contender Series last season, but an injury held him back. Since then, Savoie has won a title for the Elite 1 MMA promotion. Savoie is mainly a grinder who will push the pace in close quarters. He wants to take the fight to the mat where his ground-and-pound is excellent, landing good shots at a solid rate from a short distance.

Josh Harvey has only one fight that went the distance on his record, which came against TUF 27 finalist Joe Giannetti. The fight was scored a draw, but many thought Harvey easily won 29-28. Harvey has spent a lot of his time on the feet, and has shown some promise despite being pretty green. He’s better once the fight gets to the mat since his wrestling is better than that of most fighters. He has good timing on his shots, so getting takedowns isn’t usually an issue.

Phil Caracappa started wrestling at a young age all the way up to high school and later transitioned into MMA. He is now undefeated as a pro and is the Ring of Combat champion. He also has a big title defense against former UFC fighter Louis Gaudinot. While wrestling would be his best aspect, on top of that, he brings good top control with solid jiu-jitsu. His stand-up is still a work in progress but he has steady volume and solid technique. Caracappa has three title defenses and has shown he is worthy of a spot on the Contender Series.

Troy Lamson has a lot of experience with 14 pro fights and 17 amateur fights (17-0). In 2016, Lamson would drop two fights in a row, but to his defense, they were against two solid regional prospects in Justin Jaynes and Nick Browne. Since the two losses, Lamson has won his next six fights, winning a regional title in the process. Lamson is an excellent wrestler having wrestled at Michigan State University. The wrestling has translated nicely to MMA thus far. Lamson doesn’t tend to strike much but he holds power. He finds it much easier to get the takedowns, get the back, and unleash ground-and-pound.

Nathan Maness became a prospect to watch last September when he beat highly-touted prospect Jesse Arnett. In that fight, he would become the TKO champion. He is currently signed with TKO but only has one fight left on his contract, which lines him up perfectly to take a Contender Series fight. He’s an excellent wrestler who has been improving in each fight.

Daukaus is only 6-0 but it was his fight last February when he beat Jonavin Webb. Webb was a former UFC fighter who was on a 4-fight win streak before losing to Daukaus. He has a 100% finish rate with all his stoppages by submission, all by a choke. Daukaus is a good striker and an even better wrestler/grappler. He’s a no-brainer for the contender series.

Sabatini has two losses but they are to Robert Watley and Jose Mariscal who are two top prospects. Last December he won the CFFC title and looked better than he ever did. Sabatini does have a background in grappling, competing in competitions like No-Gi, and has experience in combat sambo as well. Sabatini is clearly dangerous on the mat with eight finishes all coming by submission. 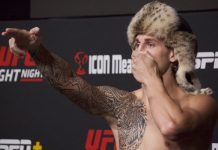