Despite the questionable future for 125lbs in the UFC, Alex Perez has not closed the door on the weight class entirely following UFC Philadelphia.

Philadelphia, PA — Opening the card at UFC Philadelphia at the Wells Fargo Center on Saturday night was a bantamweight scrap between former flyweights in Mark De La Rosa and Alex Perez. With flyweight in limbo, any number of 125lb’ers have moved north. It was not the first dance for Perez at bantamweight, nor De La Rosa, but it was Perez, in a lop-sided unanimous decision, who took home the victory Saturday.

De La Rosa seemed content to fight off his back when Perez got the fight to the ground. “I just go with the flow,” Perez said when asked whether he felt he really got the better of his opponent when he went to work on top. He would go back to that position throughout the fight. “If it’s not broke, don’t fix it.”

Asked whether he was surprised by anything in the fight, including De La Rosa accepting being on his back and punching from bottom, Perez said he wasn’t. “He had a good kimura in the first time,” Perez allowed. But he listened to his coaches, and was able to follow their advice step by step. “I felt like I did a really good job listening. It’s a little easier when you’re first fight of the night, the arena’s not packed.”

Post-fight, Perez left the door open for another outing at flyweight. He followed up on that backstage, saying “to me it doesn’t matter. [Bantamweight] is actually an easier cut, but I don’t mind going to 25s, if I’m going to be champion. 25s, 35s, doesn’t matter. 25s is a cut, I gotta be more disciplined, not as many buffets.”

“It all depends what the UFC wants me to do.” With no crystal ball, he’s not “a match maker, I’m not running the company. It doesn’t matter to me what he does. I just got to worry about myself, and go from there.” 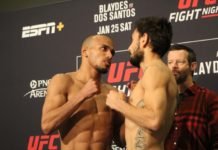