The decision was controversial, but Kevin Holland was able to defeat Gerald Meerschaert at UFC Philadelphia in an exhausting fight.

Kevin Holland was 12-3 in his career and on a three-fight win streak when he won on Dana White’s Tuesday Night Contender Series. Unfortunately, his prize was a promotional debut against knockout machine Thiago Santos at UFC 227. Holland lasted all 15 minutes but took the loss, then recovered with a third-round rear-naked choke finish in his last fight.

Gerald Meerschaert was an experienced 25-8 with 23 stoppages when he made his UFC debut on short notice. He kept that run going with an anaconda choke in his promotional debut followed by an armbar victory. He is 2-2 since then, with two stoppages and losses to Thiago Santos and Jack Hermansson.

Both fighters opened the match exchanging kicks before Meerschaet quickly shot in for a takedown with Holland going for a guillotine that sunk in deep. Meerschaert’s face was turning red before being able to break free and a scramble ensued with Meeerschaert now looking for his own deep guillotine. He wound up on his back with Holland twisting around trying to escape. Briefly, they got back to their feet but right back to scrambling and dueling guillotine attempts the round ending with Holland landing some solid ground and pound.

Opening the second round, Holland lands a solid overhand right but gets overly aggressive leaving Meerschaert able to land the takedown. Getting back to their feet with both fighters looking completely gassed, Meerschaert pulls guard and somehow winds up in top control. Scrambling all over the mat once again, Holland ends the round landing ground and pound.

Lots of hard breathing in the third. Holland drops his opponent with a leg kick and takes his back with little resistance, tossing him to the mat against the cage. Amazingly, Holland allows Meerschaert to get another submission attempt in and continues grappling with him. The fight ends pretty anti-climatically with the fighters clinched against the cage and struggling to the final bell. 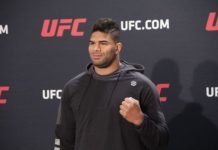 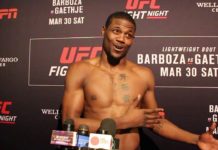 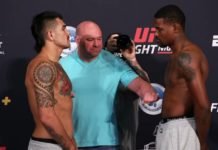