Kevin Lee will be looking for a fresh start when he moves up to welterweight to take on Rafael dos Anjos in the UFC Rochester main event in May.

Not long after UFC Ottawa apparently secured a main event, UFC officials have revealed to the Rochester Democrat and Chronicle that the UFC Rochester main event is in place. That fight will see Kevin Lee make the jump to 170lbs, after spending his UFC tenure at lightweight. Lee will take on former lightweight champ turned welterweight contender Rafael dos Anjos in the headliner. The event airs on ESPN+, and is numerically UFC Fight Night 151.

Lee (17–3) has had his struggles over the past couple of years, despite an impressive run in the UFC overall. He came up short against Tony Ferguson with the interim lightweight championship on the line in 2017, at UFC 216. The following year, he missed weight for a successful headlining bout against Edson Barboza at UFC Atlantic City, then fell to Al Iaquinta for the second time in his career at UFC on FOX 31 this past December.

With weight struggles and a tough road to the title, Lee had been one of many fighters showing interest in a 165lb division. With the UFC and promotion president Dana White hesitant to pull the trigger on launching another weight class, however, off to welterweight Lee goes.

Meeting him there is former lightweight champ Rafael dos Anjos, who found new life at 170lbs, at least initially. He won his first three fights in the weight class, but has now dropped two straight — to Colby Covington, for an interim title the American was later stripped of, and Kamaru Usman, who would go on to win the undisputed title at UFC 235. 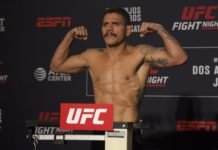 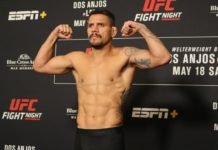 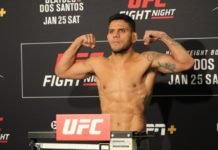 Anderson Silva Reflects on First Fight with Sonnen: “Chael Completed Me, and I Completed...

Bellator’s Jared Scoggins on Signing with Promotion, “Killers” at 135