When it comes to Fight Night main events, it’s hard to argue over the pairing of Al Iaquinta vs. Donald ‘Cowboy’ Cerrone, targeted to top UFC Ottawa.

It looks like the UFC Ottawa main event is in place. ESPN was first to report news on Tuesday that the UFC was looking at booking lightweights Cowboy Cerrone and Al Iaquinta as the main event of the Fight Night card in May. To this point, the highest profile bout announced had been Elias Theodorou vs. Derek Brunson. Yet while a good fight, it lacked the sizzle necessary to serve as the main event. Cerrone vs. Iaquinta? Putting Raging Al and Cowboy together seems like a no-brainer. And it’s a suitable main event that should get the Canadian crowd on its feet.

Iaquinta (14–4–1) last fought in the main event of UFC on FOX 31, the promotion’s final bow on the big FOX network. Hosted in Milwaukee, WI, Iaquinta took home a five-round unanimous decision win over old rival Kevin Lee in the fight. That was the New York native’s first fight back after challenging for lightweight gold against Khabib Nurmagomedov at UFC 223. Overall, Iaquinta is 6-1 over his past seven UFC bouts.

Cowboy Cerrone (35–11 (1)), meanwhile, seems to hold every record there is to hold in the UFC, outside of those involving titles. A proud new pop with an infant son, he appears to have found new life across his past two fights, finishing both Mike Perry (at welterweight) and Alex Hernandez (in Cowboy’s return to lightweight). That last victory, at UFC Brooklyn in January, seemed to have earned him a shot at Conor McGregor. Yet that ship looks to have sailed, as McGregor pursues main events and a potential title fight with the winner of Holloway vs. Poirier 2.

In the meantime, it’s a gritty real estate agent versus a modern day cowboy in the main event of UFC Fight Night 150, as UFC Ottawa is otherwise known. The card unfolds in Ottawa, Ontario on May 4, 2019 at the Canadian Tire Centre. 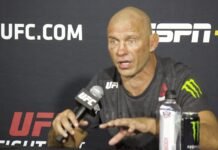 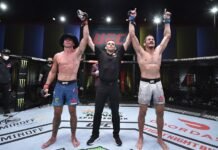