Vasyl Lomachenko has taken the boxing world by storm, but the path to MMA was an option early in his career.

Los Angeles, CA — Pound-for-pound boxing great Vasyl Lomachenko has his next fight set against Anthony Crolla next month. Yet while it may sometimes fly under the radar, the Ukrainian standout, who amassed nearly 400 wins as an amateur before turning pro, has trained in other disciplines. And though it never really came close to being serious, he once considered competing outside the boxing world.

“When I was a kid, I train[ed] wrestling,” he told Cageside Press this week. “One coach, after one competition, one coach asked me ‘hey, maybe you can start training wrestling every day, and we can prepare for big competition.'” It was the type of opportunity that might have paved the way to an MMA career.

Lomachenko considered the offer. However, “I think [a] couple days, and after that, I answer him ‘no, no, no thank you. I follow boxing, and I continue training boxing.'”

What might have been. While he hasn’t looked back, ‘Loma’ is a fan of the sport, and trains with UFC bantamweight champion T.J. Dillashaw. “I never think about myself [in the] UFC or MMA. But I love the sport, it’s very interesting for me. I like it.”

The connection with MMA grew when the boxer infamously offered to spar with Conor McGregor in advance of the MayMac fight. That never came to fruition either.

While MMA and Loma will always be a “what if” with his early training in other disciplines, he rules the roost in boxing at the moment. The unified lightweight champ holds the WBA (Super), WBO and Ring magazine titles and is ranked the best pound-for-pound boxer by ESPN and the Boxing Writers Association of America.

In April, at The Forum in L.A., he faces off with Anthony Crolla. Of his opponent, Lomachenko said that “he has a special style, because he always sits on the defense. He has very good defense, he’s always close, and he has good pressure. So it will be very interesting for me.” 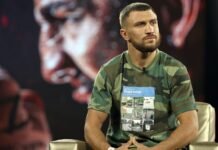