Vasyl Lomachenko looks to add to his legend in boxing tonight, but he has long flirted with the idea of crossing over into the world mixed martial arts.

When it comes to the sweet science versus the evolved mixed martial arts, there is rarely a crossover at the highest levels.  Quite bluntly, the time in dedication it takes to become elite in either discipline leaves little room to reach the same heights in the other regardless of the talent of the athlete.  Furthermore, the money and recognition should one become a top star in boxing or MMA make it difficult business wise for one to risk decreasing their value by attempting to crossover into the other.  It is what makes Holly Holm’s success in both so ground-breaking and why spectacles such as Mayweather vs McGregor are seminal events when they do come together.

But what if one of the great boxers of this generation did shed some weight off their gloves and step into the cage?  What if a true superstar of the squared circle with the name recognition and branding deals crossed over simply for the love of the fight game?

Btw, Loma told me he can wrestle too. #TrueStory
pic.twitter.com/NolMlu3iYE

Vasiliy Lomachenko is currently ranked no less than number three, and in many cases number one, on nearly every major pound-for-pound list in the world of boxing.  His name is always in conversation along with Canelo Alvarez, Tyson Fury, and Terence Crawford as the best of today’s generation.  He has brand partnerships with Venum (the UFC’s new outfit provider) and he is one of the towers for Top Rank boxing on ESPN along with the aforementioned Fury.  Tonight, he competes in the second biggest boxing event of the year against Teofimo Lopez as he attempts to unify the lightweight titles of the world.

“Hi-Tech” has long flirted with a venture into mixed martial arts and the relationship is a notable one to observe.  His sparring session with TJ Dillashaw in 2017 went viral with many wondering about a crossover for both men.  He’s also posted videos working (albeit playfully) on his muay thai.  But many people don’t know is that one of the most prolific boxers of today was competent on the mat in his native Ukraine in his youth.  In an interview last year, he discussed his grappling origins and the ambitions his coaches had for him to continue competing before he devoted his life to his true love of boxing.  It is more than hyperbole to boost his legend; there is video evidence of the skills he developed training sambo, wrestling and judo as a teen.

You ready to fight me at 135 @JorgeLinares ? If not, maybe I’ll go win a belt in the UFC first while waiting on you. 😂 pic.twitter.com/XHApvExSoD

So how would Lomachenko fare in mixed martial arts? Let’s start with the numbers.  He would most likely compete at 135 pounds where he has enjoyed most of his success as a boxer.  At 5’7 he stands slightly taller than current UFC bantamweight champion Petr Yan.  He does notably only have a 65.5 inch reach, shorter than most of the top bantamweights in the division.

It is one thing to grapple and train on the mats, it is another to compete against a long-trained athlete who is not only proficient in grappling but also eager to throw punches and elbows in the process.  More so than any other skill, there is the challenge of putting all the disciplines together.  Though it is not mentioned as much as having a dominant skill such as Khabib’s wrestling or Adesanya’s striking, the ability to blend the different aspects of MMA smoothly is as much a factor of success as being proficient in each one.  If Lomachenko were to crossover into the cage, his greatest challenge would be putting them all together in real-time competition.

Does Lomachenko have the traits necessary to succeed in mixed martial arts?  One would assume he obviously does.  His commitment to his craft and unorthodox training all suggest that if he were to commit to mixed martial arts fully that he has the temperament to excel at it.  Are there still more challenges to be found in boxing should he be successful tonight?  Or would he finally decide that a new arena is the best place to challenge himself?  The whole idea is almost too enticing to imagine. 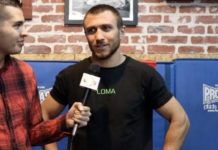