UFC 237 appears to have a welterweight fight set between Thiago Alves and Argentina’s Laureano Staropoli in his sophomore appearance for the promotion.

Thiago Alves appears to have his next bout set, and he’ll be heading back to Brazil for the second fight in a row. MMA Fighting was first to confirm that Alves was being targeted for a fight with Laureano Staropoli at UFC 237, citing multiple sources. A former title challenger in the stacked welterweight division, Alves found success earlier this year at UFC Fortaleza in his home town.

Alves (23–13) picked up a controversial decision win over Max Griffin in Fortaleza last month. That victory in a close, back-and-forth fight snapped a two fight win streak for ‘Pitbull.’ Overall, he’s 2-4 across his last six fights in the UFC. His last win prior to the Griffin fight came against Patrick Cote at UFC 210 in Buffalo in 2017. Cote retired after the fight.

At 35, Alves is long removed from the title hunt, but challenged the legendary Georges St. Pierre at UFC 100 in 2009. The challenge came following a seven fight win streak.

Laureano Staropoli (8-1) made his debut with a decision win over Hector Aldana in his native Buenos Aires at UFC Argentina in November. That improved his current streak to six straight wins.

UFC 237 takes place in Rio de Janeiro, Brazil on May 11. Rose Namajunas will defend her strawweight title against Jessica Andrade on the card. No main event has been announced as of yet. 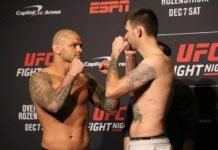