It looks like Bellator MMA has found the solution to the Bellator 219 problem. With Lornez Larkin recently forced off the card, Bellator CEO Scott Coker announced Friday that a new main event between lightweight standouts Saad Awad and Brandon Girtz had been booked. In addition to Awad vs. Girtz, Coker also revealed that former featherweight champion Daniel Straus had been added to the card.

.@SAADMMA vs. @BrandonGirtzMMA is the new main event of Bellator 219.

Saad Awad (23–10) will be coming off a unanimous decision loss to ex-UFC and WEC lightweight champ Benson Henderson when he goes up against Girtz later this month. That snapped a four fight win streak for Awad, who had piled up victories over Ryan Couture and J.J. Ambrose among others.

Brandon Girtz (15–8), meanwhile, is just 1-4 in his last five. However, the gritty Minnesota-born fighter, fighting out of Denver, has been facing some top-flight competition in that time. He’s coming off a loss to Michael Chandler, prior to which he had defeated Luka Jelcic at Bellator 190.

Daniel Straus (25–8), meanwhile, returns to action after suffering a terrifying motorcycle accident that easily could have been career ending. Straus has not fought since October of 2017, where he lost via submission to Emmanuel Sanchez.

The former 145lb champion in Bellator is returning at the perfect time, however, with the featherweight grand prix on the horizon. 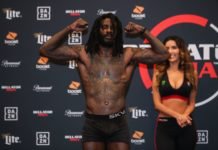