Bare-knuckle FC was back in action on Saturday, October 15, 2022 with BKFC 31, featuring an interim light heavyweight title fight closing out the show.

In the main event, Mike Richman, a longtime Bellator MMA veteran turned bare-knuckle boxer, looked for his fourth straight win under the BKFC banner — as well as for the interim world title. Richman’s trio of BKFC wins dated back to last year, and included victories over notable names in David “Caveman” Rickels and Dakota Cochrane.

Opposite Richman was Isaac Doolittle, winner of two straight under the promotional banner.

Also in action at BKFC 31 on Saturday, another Bellator MMA standout in Brandon Girtz. The hard-hitting fighter was paired up with Jake Lindsey in the evening’s co-main event. Chris Camozzi, meanwhile, was paired up with Bubba McDaniel one fight earlier.

BKFC 31 takes place Saturday, October 15, 2022 at the 1st Bank Center in Broomfield, Colorado. The card airs live on Fite.tv — full results can be found below. 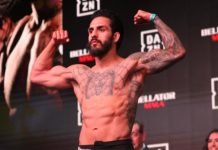