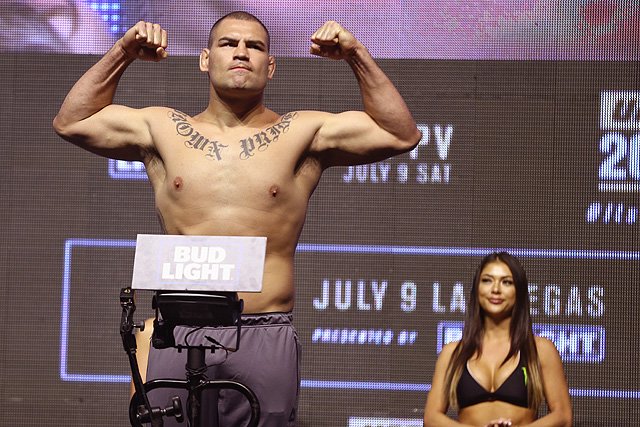 Cain Velasquez will be returning to action after more than two years in the main event of UFC Phoenix. But can he turn back the clock against the formidable Francis Ngannou?

When looking at the unforgiving nature of the fight game, it is easy to understand why successful returns from long layoffs are so celebrated. For example, few would argue that Georges St-Pierre’s return after a four year absence to become middleweight champion was anything short of historical. At UFC Phoenix, former heavyweight champion Cain Velasquez will look accomplish the feat when he returns from a near three-year layoff against the hard hitting Francis Ngannou.

At the height of his powers, the force of nature that was Cain Velasquez was a staple on the pound-for-pound list. He opened his career 9-0, eliminating foes like Cheick Kongo and becoming heavyweight champion by thrashing Brock Lesnar. The trilogy with Junior dos Santos, which is the highlight of his career, cemented his place at the top of the division as he twice dominated his athletic and powerful Brazilian rival.

But through the course of his career, injuries have also paused what at times looked like the greatest heavyweight career of all-time. He suffered a torn labrum that led to a year-long layoff before losing to dos Santos in 2011. He had another two-year layoff before returning to lose to Fabricio Werdum in 2015. In his favor, he had another single year lay-off before returning to throttle Travis Browne back in 2016.

It will be just over two-and-a-half years since his last appearance when he steps into the cage on Sunday. In that time, Velasquez admitted that some of the time has been spent taking care of nagging injuries while some of it has been to spend vital time with his growing family. In his absence, Stipe Miocic rose to become arguably the greatest heavyweight in history and then saw Daniel Cormier unseat him from the throne. A new cast of heavyweights now fills the ranks, and it is easy to wonder if Velasquez can still be a presence after his injuries and time away.

One of the new players who has emerged is Francis Ngannou. “The Predator” put together as impressive a streak of finishes as one could hope for when he entered the UFC by stopping six straight opponents by either knockout or TKO. His supposed weaknesses, with conditioning and his ground game, all involved surviving his assault on the feet first. It was a task that was too much for his first several opponents. His run culminated with a violent knockout of Alistair Overeem that has become a must-have in highlight reels since.

His 2018 campaign started off unceremoniously by comparison. Despite a competitive effort for the first five minutes against Miocic, the Cameroonian was on the wrong end of a clinic last January. His long-anticipated bout with Derrick Lewis went on to become an embarrassing display of inactivity. However, any demons he might have been suffering from were seemingly exorcised with a vintage first round knockout against surging contender Curtis Blaydes.

The big x-factor going into the fight is what condition Cain Velasquez will be in after his layoff. The reality is that it may not matter against Ngannou. Ngannou should look to be the aggressor and make Velasquez respect him early. Velasquez is not a counter-striker and does his best work when leading the dance so Ngannou must come forward early and make it a physical fight. His best strategy will be to get Velasquez to the fence where he can punish him with powerful blows to the body. Lastly, Ngannou should not look to conserve energy as a long fight favors Velasquez.

While an emphatic knockout would be the kind of victory that revitalizes his career, Velasquez should not look to get into a battle with Ngannou in the middle of the Octagon. Rather, he should look to change levels when Ngannou throws or use the clinch against the fence to drag the fight to the ground. If he does stand with Ngannou, then footwork and the shoulder roll will be key as he will need to minimize the potential damage as much as possible.

Heavyweight champion Daniel Cormier is recovering from injuries but is expected to continue competing in 2019. With Cormier’s focus on a potential bout with Brock Lesnar, both Velasquez and Ngannou will have to seek opportunities outside the title. As Velasquez will not fight his friend Cormier regardless, a fight with former champion Stipe Miocic would be the biggest possible bout available for the former champion and is easily a pay-per-view caliber match. Ngannou will likely turn his focus to Junior dos Santos should the Brazilian turn-away Derrick Lewis in March.