Vanessa Porto has released a graphic shot of her eye poke injury, sustained during the main event of Invicta FC 34.

Ouch. Like the similarly cursed main event of Bellator 215, Invicta FC 34 did not end the way any involved wanted. In a flyweight title fight with the vacant belt on the line, Brazil’s Vanessa Porto took on the always popular Pearl Gonzalez. For the better part of three rounds, Porto was in control. In the fourth, Gonzalez staged a bit of a comeback — until an inadvertent eye poke stopped the fight in its tracks.

Porto could not continue. Which meant, given the action was already in round four, that it went to the scorecards for a technical decision. Porto came out the victor, and new Invicta FC flyweight champion. Though no doubt not the way she had planned.

On Saturday, Porto released a close-up of the injury on social media. Yikes! The cut was bleeding visibly in the cage in Kansas City, and you can see a piece of her eyelid is pretty much missing. Which is exactly why fighters are admonished not to have their fighters outstretched.

Luckily for Porto, the damage wasn’t worse. She’s expected to face the winner of Invicta FC’s flyweight tournament next. 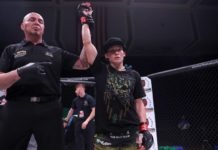 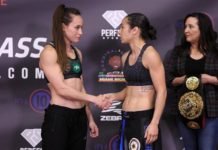 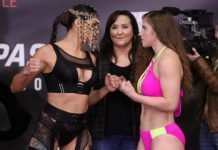