What gives, New York? Gregor Gillespie was not only booed in his own back yard, his gear and wallet were stolen during Saturday’s UFC Brooklyn card.

Despite picking up a win at UFC Brooklyn on Saturday and further establishing himself as a top lightweight in the UFC, it was a rough night for Long Island native Gregor Gillespie. Gillespie (13-0), an NCAA Division-I wrestling All-American, was booed by the crowd in what was essentially his own back yard. That, even though he finished Yancy Medeiros in the second round via TKO. Then the news got worse: Gillespie was robbed.

Well, that’s an onion in the ointment. “I’m from New York – I know how we are here. We want action. We want blood. But I heard a few boos out there, and that hurt my feelings a little bit,” Gillespie told MMA Junkie after the fight. Yet while the boos may have stung, no doubt the theft of his gear, including his wallet, hurt worse.

Gillespie posted a statement on Instagram addressing the culprit, asking the perp to at least give his wallet back.

“To who ever it is who stole mine and one of my coaches fight bags at the Barclays center tonight. Could you please just return my wallet and my mouth guards?,” Gillespie wrote. “If you stole the bag for some memorabilia, that’s cool you can keep that if you want, but id [sic] really like my wallet and mouth guards back. I REALLLLLY don’t want to go to the DMV.”

Gillespie, who can expect a step up in competition when ever he returns to action, is really going to need another fishing trip to blow off some steam now.

UFC Vegas 35: Vinc Pichel Wants A Rematch With Gregor Gillespie Down The Line 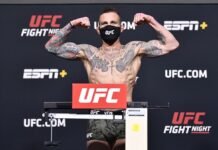