Vinc Pichel is already looking to the future for a potential rematch.

Pichel picked up a unanimous decision win over Austin Hubbard this past weekend UFC Vegas 35. “From Hell” continued his win streak as now he has won three straight.

In his in-cage post-fight interview, Daniel Cormier asked Pichel when he’d like to return and who he would like to fight next.

“ASAP,” Pichel answered. “I don’t know who I’d like to see, but I know down the line if that dude with fisher friends wants to run it back, I’m down to run that back and right that wrong in my career.”

Pichel was talking about the No. 10 ranked lightweight Gregor Gillespie. The pair fought in 2018 at UFC Fight Night: Rivera vs. Moraes. Gillespie would end submitting Pichel in the second round with an arm-triangle choke, handing “From Hell” his second professional loss. The 38-year old hasn’t lost since.

In his post-fight interview with the media, he doubled down with a potential rematch with Gillespie.

“I kinda really do want to fight that fish dude again one more time and right that wrong…but whatever whoever Sean Shelby gives me, I’m going to beat the hell out of them,” Pichel said.

Pichel calling Gillespie the ‘fish dude’ and ‘fisher’ is just a call back to Gillespie saying he is the best fisherman in the UFC and seemingly always on the ocean fishing. If Pichel keeps winning, a rematch with Gillespie could definitely be in his future. 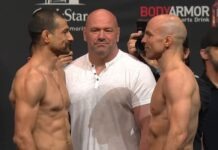