Cageside Press was on hand for CES MMA, where the matinee card at the Twin River Casino in Lincoln, Rhode Island kicked off at 2PM. The show was the debut of CES on UFC Fight Pass (which would air the main card at 3PM EST). To start us off right we had a short prelim card.

The Philadelphia native Aubry looked to continue his success in CES, while Pinhierro, a native of Connecticut, was fighting close to home. We began this one with a strong takedown by Aubry, smothering his opponent. Pinhierro regained composure, as they stood up Pinhierro cut his opponent open with an elbow. An action packed round ended with what seemed like both fighters tired and hurt.

In Round two Aubrey opened with a clinch attack and successfully took the fight to the ground. Some vicious ground and pound had the referee watching closely but Pinhierro defended himself enough for continuance. Aubrey continued his control on the ground throwing shots at will. Aubrey found an opening under the neck and forced a rear naked choke tap by his opponent.

Monroe, the North Carolina native, was making his CES debut looking to turn the page from a two fight losing streak. Baxter, a CES regular, was coming off a tough loss to former title challenger Kody Nordby. We began round one with faints but the first official strike was an eye poke by Monroe that needed a check from the doctor. Baxter shot in for a takedown but was caught with a strike from Monroe. The two clinched by the cage, which was broken up by the referee to stand back in the middle. As round one ended Baxter landed a beautiful leg kick and continued attacking the leg of his opponent.

Round two has Baxter starting where he left off, landing at will on Monroe. A stuffed takedown changed momentum in the fight as Monroe began landing a lot more. A left hook caught Baxter clean and dropped him; as the two begin to throw again Monroe again is caught with an eye poke, which results in a loss of a point for the round.

Baxter began round three on a mission, leg kicks viciously landing. Monroe yet again seemed to clip Baxter as the two continued to throw. Baxter continued shooting for the takedown attempt but Monroe was ready for it every time. The third round that saw Baxter throw everything he had into it, Monroe seemed to take this one but the -1 point could hurt him there.

Knight, out of Connecticut looked to continue his undefeated record against CES regular Kevin Haley. This was our first fight of the night live on UFC fight pass. Haley hit Knight with what looked like a hard jab but Knight just smiled back at him. A missed backward leg kick resulted in top control for Kevin Haley. A submission attempt by Haley failed, and Knight gained top control but neither fighter were quick to work on the ground. As a triangle attempt by Haley goes wrong Knight took advantage and smashed some ground and pound, which led to what appeared to be a somewhat pre-mature stoppage. After closer look it however, it seemed there was a tap to strikes. 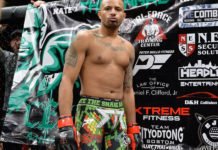 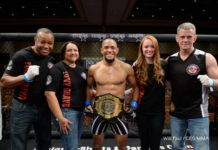 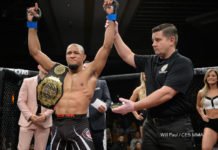