UFC Brooklyn is a notable fight card for many reasons, and on the prelims is Joanne Calderwood’s chance to become a contender once again.

The UFC makes a historic move on January 19 with their ESPN debut. The promotion started off way back in 1993, which makes this landmark move with an amazing fight card headlined by a flyweight superfight between champion Henry Cejudo and current bantamweight champion TJ Dillashaw. Also featured on the card is the debut of former KSW flyweight champion Ariane Lipski.

Lipski is one of the hottest prospects in MMA. At just 23, she has managed to create waves in the MMA community because of her exciting and violent fighting style. When she enters the octagon her record features names the likes of Sheila Gaff and Diana Belbiţă. She is also ranked as one of the top flyweights in the world already by multiple websites. Plus her stunning looks make her even more marketable. Standing in her path will be someone who was once in her shoes, Joanne Calderwood.

Back in 2015, Joanne was the hot undefeated MMA prospect. She was loved by all and had an exciting fighting style. She was considered as a future champion and in the early days of the strawweight division was considered a force to be reckoned with. However, during the dominant reign of Joanna Jedrzejczyk, she became one of the many fighters who got lost in the super competitive pile of the division.

With the creation of the flyweight division, she found the light she desperately needed. Lipski can be that opponent who can get her back to the top. If she manages to impress the audience by dominating the prospect, she becomes one of the few contenders for the title. This fight stands as one of the most exciting fights on the card and the attention it has received makes it a high-profile bout. This is a golden opportunity Jojo can’t miss.

UFC Brooklyn: Cejudo vs. Dillashaw airs live Saturday, January 19, on ESPN+ in the US, CTV2 in Canada, and SONY ESPN in India on January 20th. 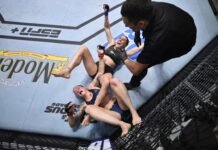 Bellator 243: Matt Mitrione Feeling Spry at 42 Ahead of Bout with Johnson