Sergio Pettis was simply outworked in his return to the bantamweight division at UFC Milwaukee on Saturday, with Rob Font scoring the win over the hometown hero.

Rob Font was the man responsible for welcoming Sergio Pettis back to the bantamweight division Saturday night at UFC Milwaukee. For Font, it was a chance to compete against a fighter he had called out long ago. Pettis, meanwhile, was fighting in front of his hometown crowd for the first time in ages. And going into battle without a draining weight cut.

The bout was the second in on the final UFC on FOX card, the thirty-first the UFC had held on the American broadcast network.

Sergio Pettis was happy to swing early, while Font flashed a deceptively quick jab. “Pettis” chants broke out in the arena almost immediately. Neither man looked ready to give an inch, but Font might have had a slight edge thanks to his jab, which was allowing him to walk down Pettis. Font would later put Pettis on his back, which ended in Pettis, now showing some damage around the eyes, throwing upkicks but unable to scramble free.

While Pettis would finish the first by getting back up and launching a spinning attack, he’d more than likely lost the round, home town hero or not. In the second, he needed to battle back, but Font was on the offensive early, throwing uppercuts, working his jab, and walking Pettis down. Each time that jab landed, Pettis’ head was snapping back. Again and again. Font mixed in some heavy leg kicks on his opponent’s lead leg. Pettis was being outstruck through two, even as he fired off the odd combination. And while he finished the round on top, he had to deal with a straight arm-bar attempt right before the buzzer.

Round three saw Sergio Pettis in dire need of some sort of finish. Though he found some momentum early, when the fight went to the ground mid-round, that momentum stalled. Rob Font controlled from the back along the fence. He latched on with a body lock to control Pettis. Dragged him back down. Controlled the ankle, and controlled the wrists. In short, Rob Font was in control in the grappling department, and eating precious time off the clock. Pettis was on his back throwing upkicks in the final seconds, until a last second head kick attempt as he got up right at the buzzer. Too little, too late.

The Pro Take: Timing and Jab of Rob Font Secures a Victory at UFC Vegas 27 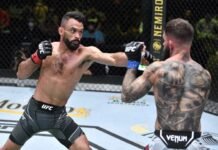 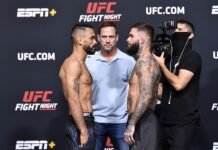